The information on this page outlines the principles for the ongoing transformation of the University Campus: both for its new buildings and the spaces between them.

This IMP seeks to accommodate over 3,000,000 gsf of academic and student life facility growth, including athletic facilities and additional housing, on the existing Northeastern campus.

To satisfy this scale of needed facilities, the IMP proposes to increase the built density through the re-purposing of under-utilized areas such as parking lots, and replacing low-rise, aging buildings, with taller, more economically and environmentally efficient construction.

The University also concurs with the goal of creating roughly 1,000 new undergraduate beds during the term of the IMP, and the creation of 600 beds in the first five years.

In addition to priorities for academic space, the current IMP focuses on increasing campus student life amenities as a part of a concerted University effort to improve the campus experience for students living in Northeastern housing and to convince more students to choose on-campus housing, thereby reducing off-campus student apartments in nearby Boston neighborhoods.

Aerial photographs of the Northeastern campus taken as recently as a decade ago, show a campus pockmarked with surface parking lots, vacant parcels and fragmented, poorly defined common spaces. Since then, the University has developed a series of pleasant public spaces, resulting in a cohesive campus environment and a dramatically improved on-campus experience.

The following goals remain as guiding principles of the IMP:

The diversity of buildings from Northeastern’s distinct periods of growth, complemented by the older buildings acquired and repurposed by the University, has created an evolving and vibrant campus environment. The master plan proposes to nurture and refine this vibrancy through future phases of development. The architectural character of the proposed master plan campus buildings will further contribute to the diversity and richness of the campus not by emulating or replicating existing styles. Rather the new facilities will be governed by their own expression of contemporary and distinct architecture. As Northeastern evolves as a research university, the campus architecture will aspire to express contemporary and creative designs of enduring quality and character. The architecture of the current master plan will also be an expression of sustainability and high performance systems that are principals of the master plan.

While new buildings will vary stylistically from previous architectural styles, the consistent theme that will tie new designs to the existing campus will be the fact that they are buildings that make a place, define and reinforce campus pedestrian circulation and contribute to the public realm of the campus and the neighborhoods.

The Columbus Lot development (a portion of which will be the site of the ISEC) introduces organic formal gestures intended to be distinguished from the generally rectilinear pattern of the original campus. These proposed bold forms also define an elegant and episodic sequence of open spaces that link the campus and the communities on both sides of the MBTA tracks. The unique character of new precincts should not be seen as a deviation from earlier styles, but as a continuation of a layered and rich campus built on architectural variety and a carefully cultivated network of landscaped pedestrian spaces. 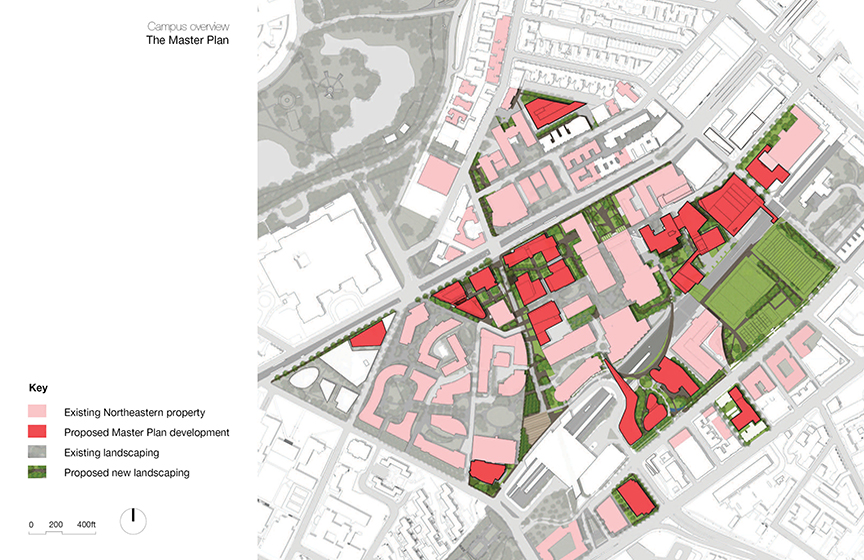 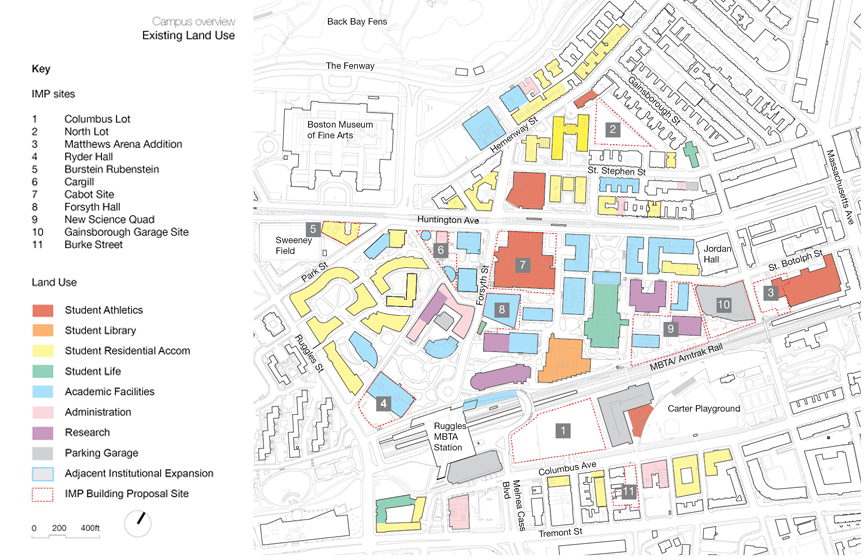 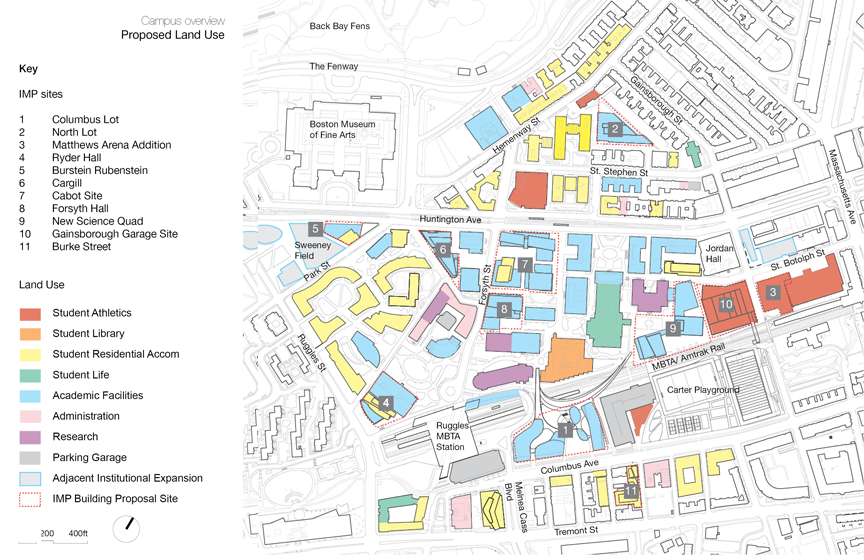 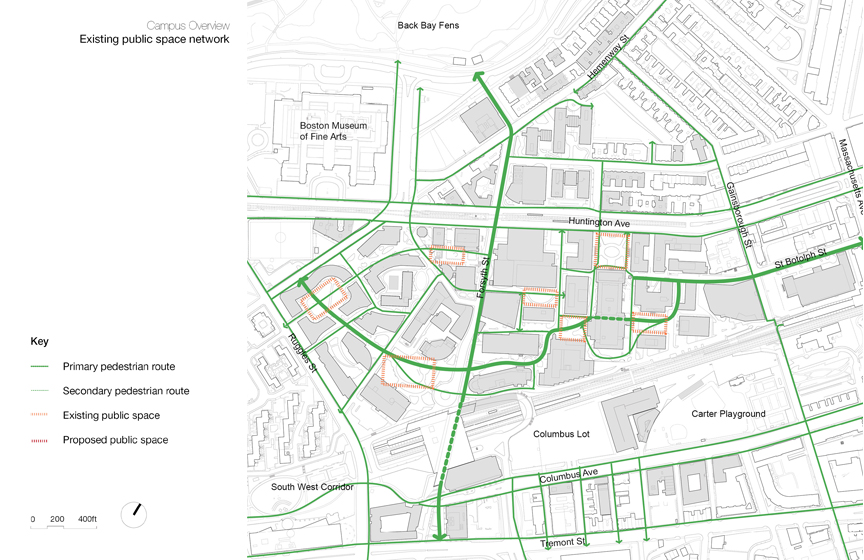 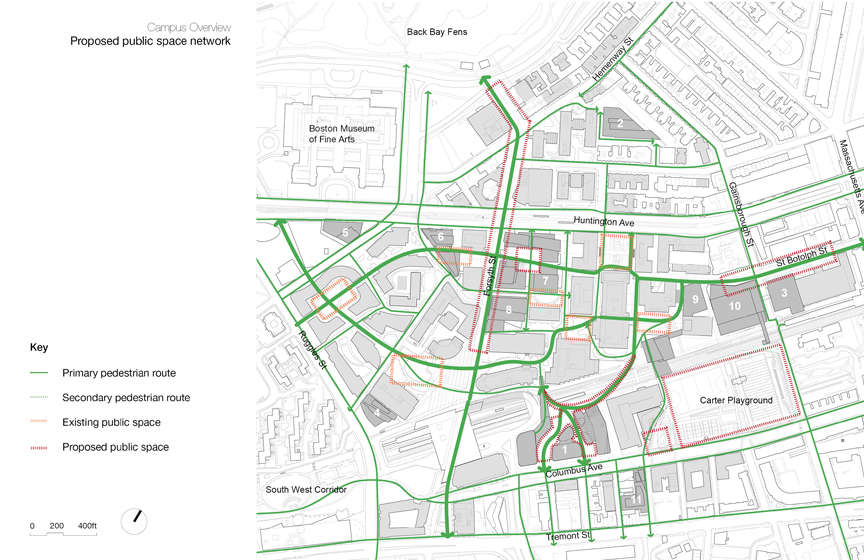 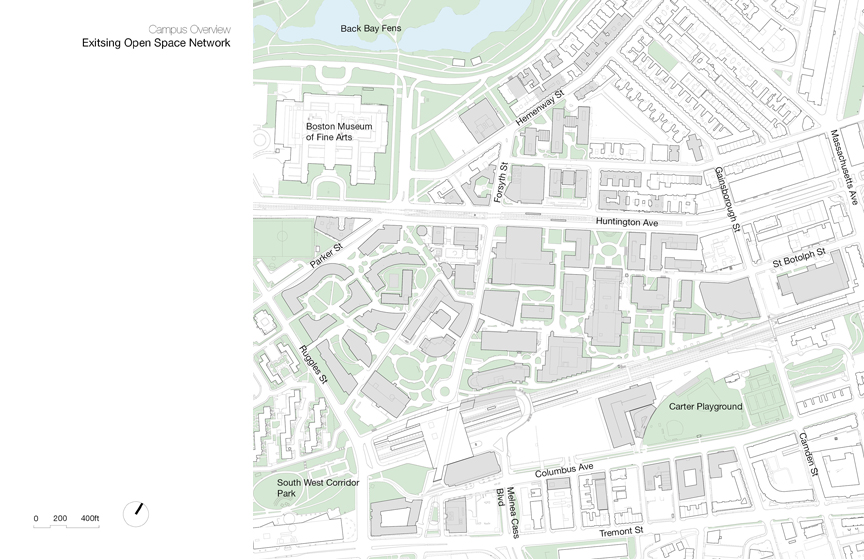 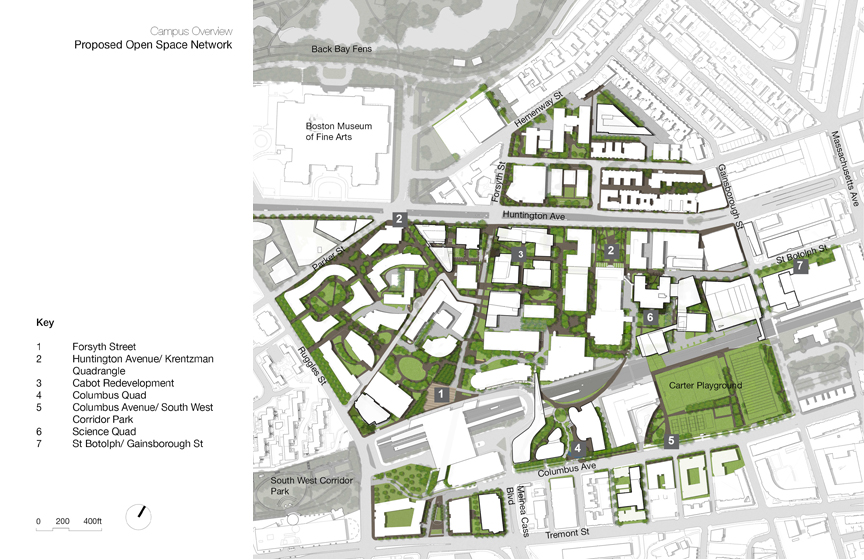 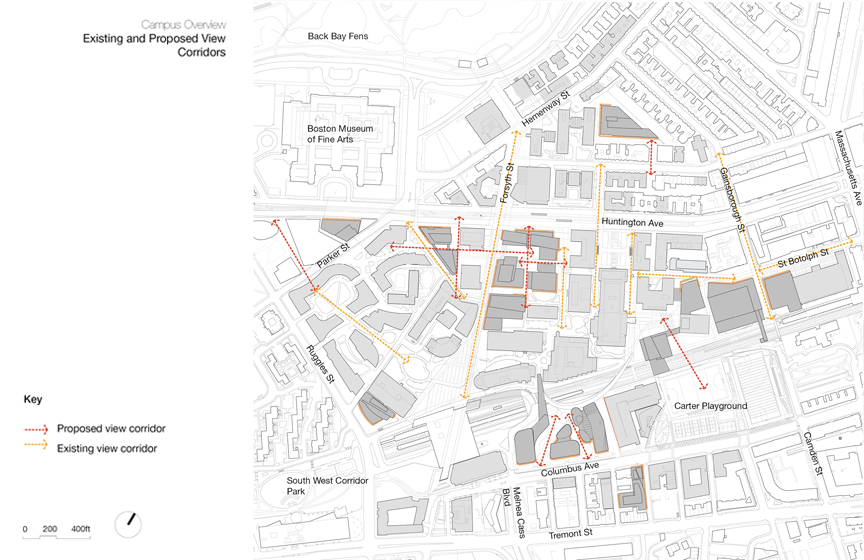 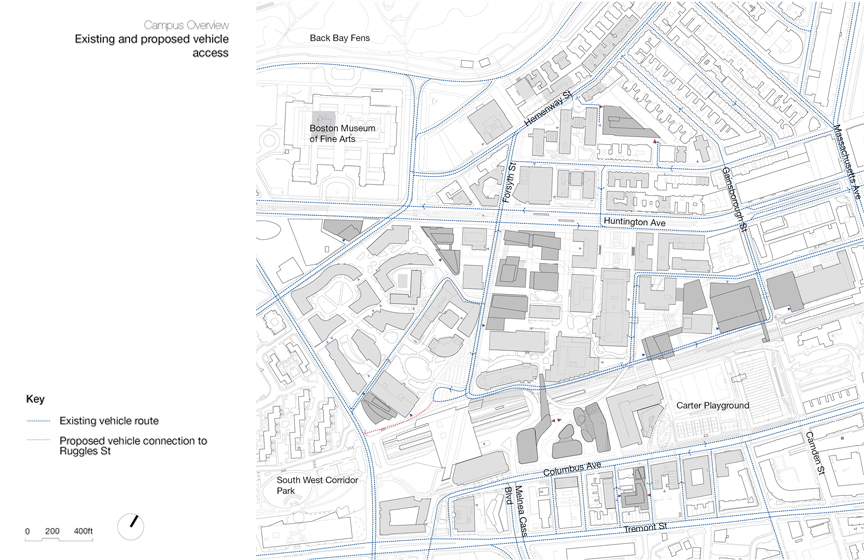 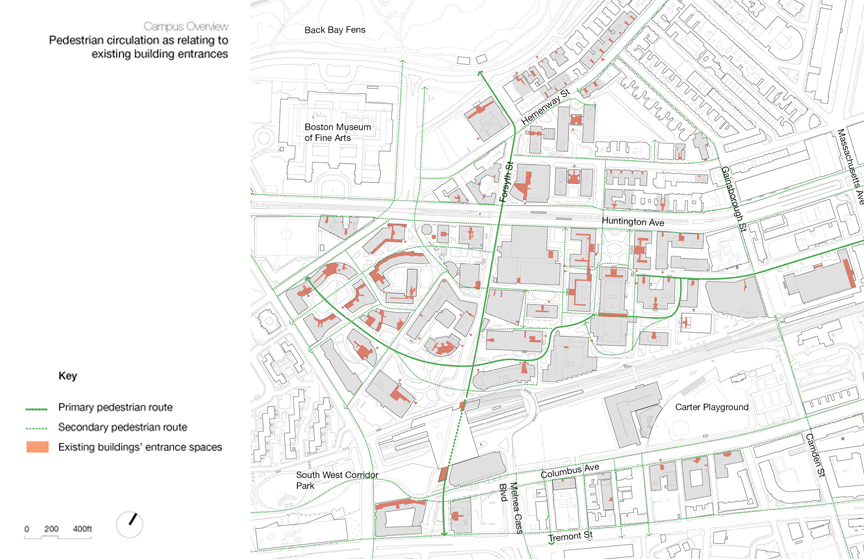 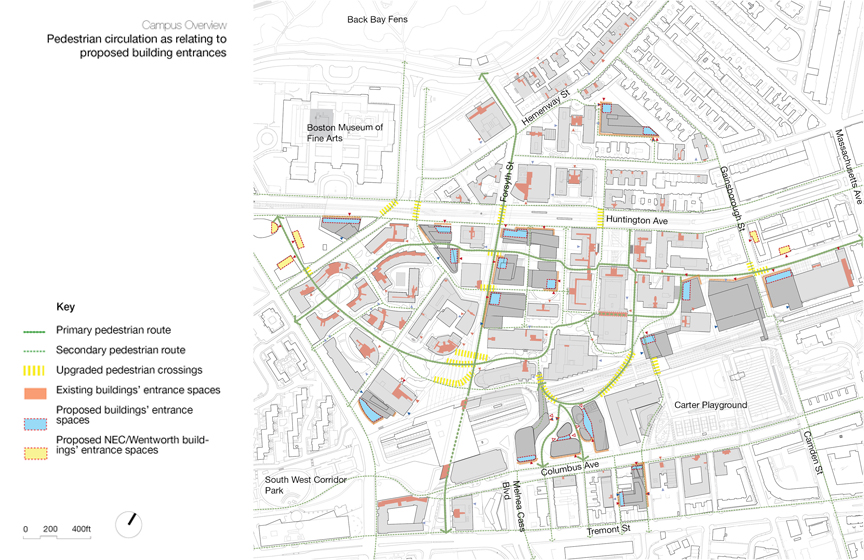 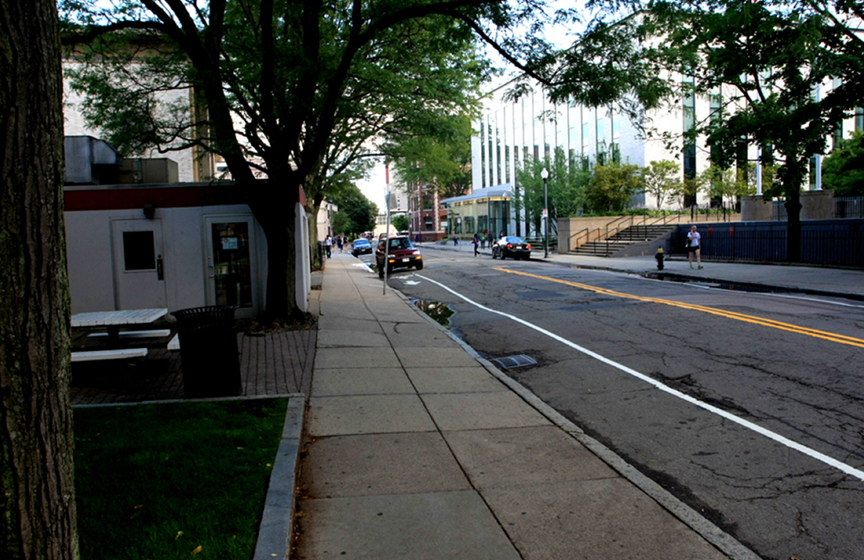 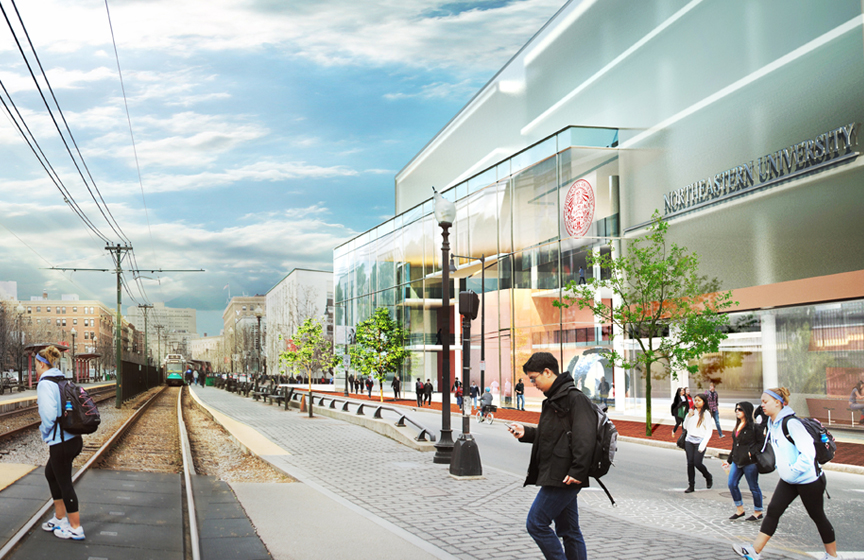 Proposed view of Huntington Avenue, looking east at its intersection with Forsyth Street. 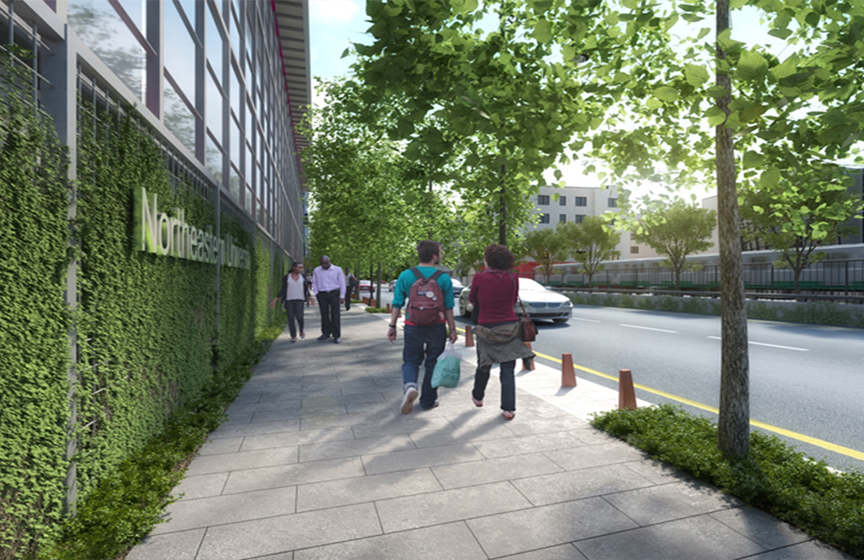 Proposed new landscaping to Huntington Avenue and the existing northern façade of the Cabot Gymnasium.

The proposed IMP projects have been grouped in a series of campus precincts that recognize the relationship between the interventions and the existing campus patterns of development and open space. While each of these precincts is geographically distinct, each district, and indeed each project, endeavors to improve the campus, as a series of interconnected spaces and buildings.

In many cases, each precinct has its own distinct architectural character, mix of uses and public spaces, or is delineated by its relationship to the public realm. The IMP proposes that each new development within a given precinct will positively contribute to the physical setting of the existing neighboring context, enhance the existing streetscape, infrastructure and pedestrian environment.

The proposals will allow for greater pedestrian accessibility throughout the campus while overcoming the campus ‘super-block’ condition to the surrounding neighborhoods on both sides of the tracks.

Each master plan proposal is to be considered within the broader context of the campus and the abutting neighborhoods with the campus systems of pedestrian routes, their related improved street crossings, vehicular/ delivery and trash collection routes all considered as part of this wider network.

Since 2000 the university has built over 2 million square feet of new buildings, 80% of which was for student accommodation. It has carried out over 33 renovation projects of its existing buildings.