On November 5th Professor Raymond Horton, the founder of the Tamer Center for Social Enterprise at Columbia University joined SEI to speak to our students and faculty. He shared his insights on social enterprise, entrepreneurship, international development, nonprofit and public management, and corporate social responsibility. He also shared his opinions on the outcome of the 2016 election results and predictions for the following day’s midterm election results. 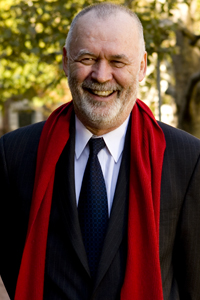 After receiving his master’s degree in political science from Harvard Law, he completed research on municipal labor relations. He then ran the Citizen’s Budget Commission, a nonprofit civic organization that attempts to influence change in the finances and services of New York City and State government. It was during this time that he decided he wanted to be a teacher in the field to help change the face of business. In 1981, he founded the Public and Nonprofit Management Program at Columbia University. He shared that he believes in social enterprises because the business sector needs to see a change and an organization with a mission to change the world even a little, could go a long way.

To evaluate our current political atmosphere in the United States, Horton developed a course, the Modern Political Economy, which teaches students to predict and adapt to the evolving world of political economy from various points in their careers. A few days before the election in 2016, he arranged a panel at Columbia, discussing not election predictions, but the significance of the widening divide in the US. He transitioned this event into a course, Bridging the American Divide, which helps students to understand “the other half” of the population. One portion of the course allows students to travel to Youngstown, Ohio to meet with manufacturers, unions, local government, and non-profit service providers.

Horton has now been researching for the last two years, how President Trump got elected. He sighted a combination of factors such as the 78,000 votes in Pennsylvania, the electoral college, Hilary Clinton being the wrong candidate to represent the Democratic party, and/or having too many Republican candidates run for their party seat. But most importantly he sighted the rise of populism to be the cause and the polarization of the political system. And shared that he believes that the Democratic and Republican parties will not be able to see eye to eye for a long time.

Professor Horton held a thought-provoking discussion on the state of today’s economy and political atmosphere. He pushed students to make time to vote the following day, citing the strength of our generation.