Ten years ago, more than 1,200 babies were born each day with HIV. Today that number is down to 400, and (RED) aims to reduce that virtually zero by 2020. (RED) was created in 2006 by Bono and Bobby Shriver to drive corporate contributions to fight AIDS. Organizations like Apple, Bank of America, Starbucks and many more partner with (RED) to create (RED)-branded products and services. Purchases of these products trigger corporate giving to The Global Fund, supporting HIV/AIDS treatment and prevention programs in Africa, home to roughly two-thirds of the world’s HIV-positive population.

The partnership between Salesforce, the Customer Success Platform and world’s #1 CRM company, and (RED) began on the 2015 U2 Innocence and Experience Tour when Salesforce joined Live Nation to sponsor the tour. At the World Economic Forum in 2016, Salesforce and (RED) announced a 5 year $5M partnership. Salesforce has a 1-1-1 model, which dedicates 1% of their technology, people, and resources to social impact organizations like (RED). In addition to donating millions of dollars, Salesforce provides technology tools that help (RED) run more efficiently. Salesforce has given the (RED) team access to their platforms that assist personalized communication and data analytics, completely free of charge. Salesforce experts have volunteered over 900 hours to ensure the organization is powe(RED) with the technical skills and training to use Salesforce Analytics, Nonprofit Starter Pack, Data.com, Pardo, and Communities for maximum impact. As a part of this partnership, Salesforce and (RED) come together for major events, including Dreamforce, the world’s largest software conference, and World AIDS Day.

Dreamforce, Salesforce’s flagship annual event, chose (RED) in 2016 as their philanthropic partner.  At the event, Salesforce CEO Marc Benioff highlighted (RED)’s work over the past 10 years at his Keynote speech. Deb Dugan, (RED)’s CEO, also spoke at the Keynote regarding the partnership and growth that (RED) has experienced due to Salesforce’s innovative technologies. The event also held a pop-up shop with (RED) products as well as a panel on the Legacy of Ending AIDS for Good featuring Deb Dugan, Executive Director of the Global Fund, Mark Dybul and (RED) Ambassador, Constance Mudenda and a session about Leadership and Boldness in the time of AIDS with Congresswoman, Nancy Pelosi. Dreamforce ’16 raised over $3M for (RED) and the Global Fund to help create an AIDS-free generation. 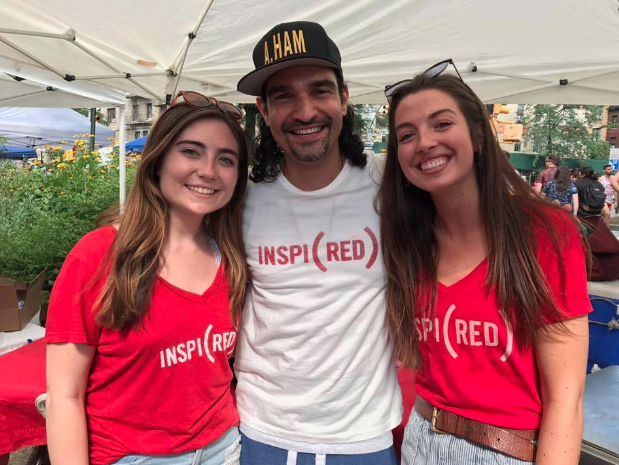 In 2017, I had the privilege of co-oping at (RED) on their partnerships team. Salesforce’s platforms are crucial to the partnerships team and are used daily to track (RED)’s partnership and products and their contributions to the fight against AIDS. From my time there, it was evident how much Salesforce has enabled greater efficiency and scaled (RED) into an innovative cloud-based organization.

I had the opportunity during my time at (RED) to plan and attend Salesforce’s sponsored (RED) Booth at the New York City Pride Parade in 2017. For this event, Salesforce gave us their spot at the parade as well as provided us with popsicles that we gave to parade goers in exchange for a follow on one of (RED)’s social media accounts. Javier Munoz, the lead in the hit musical Hamilton as well as one of (RED)’s biggest supporters, joined us at this event last June.

With the help of Salesforce and their other corporate partners, (RED) has raised $475 million to combat the fight against AIDS and has saved 90 million lives. The partnership between (RED) and Salesforce focuses on innovation and growing (RED) to its highest potential to make the greatest impact. The young partnership has already made an incredible difference in (RED)’s operating ability in a way no other partner has before. The future of the partnership is bright and may be the transformation (RED) needs to achieve their goal of an AIDS free generation.