We’ve learned over the last couple of weeks that photographs and videos of children victimized by chemical warfare in Syria led to a quick and targeted response from the US government.

I’ve since read that the cost of the Tomahawk missiles fired in response was about $50 million, or approaching $1 million each.

And those two pieces of news leave me wondering…if other photos of children who have died horrible and entirely preventable deaths would generate a similar though peaceful resource-rich reaction. 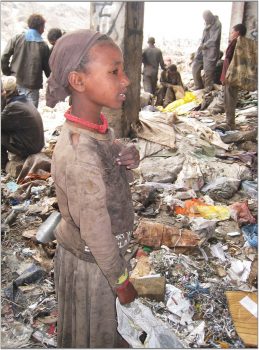 This child is one of many who lives and works near the Koshe landfill.

I’m thinking specifically of the almost unnoticed tragedy that occurred near Addis Ababa, Ethiopia last month.  The official death count from a “garbage landslide” at the Koshe Garbage Landfill is 113, and mostly children.  These children and families lost their lives while living and working among the city’s massive garbage dump, with most being suffocated or crushed by the weight of tons of rotting garbage.

What could a $50 million investment of “peace through prosperity” capital do for this community, and the millions of others who are forced to live in and around garbage “cities” in order to survive?

Sadly, children are victims of senseless violence all over the world, every day, including children victimized by the daily unrelenting violence of extreme poverty.  Gandhi reminded us all that “poverty is in fact the worst form of violence” and yet little is done to rally ordinary people and global leaders to the inevitable crises arising from extreme poverty.

To the contrary, it looks like here in the States we may be on a path to cutting much of the little bit of foreign aid we provide to the world, and the world’s poor, presumably to fund other priorities.

Wouldn’t it be something to live in a world where we invest our collective wealth in “prosperity” bombs” that we drop into places like the Koshe Garbage Landfill to destroy poverty and lift up the children that are slowing being destroyed by the toxin of intergenerational poverty.

By the way, there are a number of social enterprises around the world dedicated to improving the plight of people, and especially children, who live in and off garbage.  Sometimes called “rag pickers,” these people can make a decent living if provided with the tools and resources to organize themselves and provide a service that is valued by others.  What trash-based communities need are meaningful investments by governments, institutions and ordinary people in these innovative enterprise solutions.