While many young people dream of a job in Silicon Valley working for a tech start-up upon graduation from college or business school, increasingly there are others who feel drawn to a different dream and a different kind of hub for start-ups.

Nairobi, Kenya is now referred to by many as the “Silicon Savanna” because of its many social enterprise start-ups. While NGOs have long flocked to East Africa and Kenya in particular, these start-ups are often for profit models that address poverty and all of the associated missing pieces that add up to a dignified and productive life. Instead of Sand Hill Road’s venture capitalists, it’s a new breed of impact investors that are following the steady growth in East Africa of start-ups designed to do good while also doing well for investors.

Many of these start-ups are the result of “mzungus” (a Bantu word for foreigners) bringing their ideas for social impact to one of the world’s poorest regions. Locals are also beginning to join in, as both founders and lead employees. Nairobi has become a place where the excitement of start-ups has combined with the intense compassion and commitment of development and the social impact sector.

The future looks increasingly bright for these “do gooder start-ups”, despite a slow pace towards the kind of liquidity events (think IPO or sale to a bigger company) that enrich traditional tech start-up founders, early employees and angel and venture investors.

One social business (a for profit social enterprise) that is especially compelling from a business and investment standpoint these days is called M-Kopa Solar. It’s just two years old, and already has more than 100,000 customers. The company provides solar power to poor and low income customers through a platform that includes innovative technology and financing. Here’s how this social business model works.

A person without electricity or with intermittent electricity (a common problem not only in poor communities but throughout Nairboi) signs up with M-Kopa to have a $200 solar panel unit installed by M-Kopa at their home. The unit consists of a d.light (another leading social business) solar system with three lights, a phone charger and a solar powered radio. In many cases, the home is a shack located in a slum that either has no power or an illegal (and often dangerous) power hook-up. The M-KOPA customer puts $35 down for this installation, and then pays off the balance of the price over the rest of the year in 360 daily payments of 58 cents each. This unique financing model makes it affordable for even people living on less than $2 a day to buy electricity that is both reliable and strong. 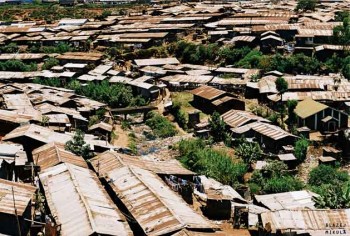 Image displaying Kibera, a Kenyan slum representative of poor communities across the country.

The installment payments are made by customers to M-Kopa using their mobile phone and the now ubiquitous M-PESA mobile phone payment system offered by Safaricom. The company has patented its platform that includes embedded GSM and a mobile payment system. To date, the company reports that 94% of its customers pay off their loan on time and in full.

While there are other start-ups following a similar path, M-Kopa has been especially impressive in its growth and market penetration. Co-founder Jesse Moran reported to Bloomberg Businessweek in December that revenue has ramped up to more than $2 million per month in just the past year, and that the management team believes that they will reach $100 million in annual revenue in the coming years. That would represent just a small fraction of the more than $1 billion that Kenyans spend on kerosene and other solutions to living without electricity. A $100 million profitable and growing social enterprise would be a breakthrough in the development of the sector that attracts even more talent and capital to the sector.

The financing history of M-Kopa is also an encouraging one for supporters of social enterprise and impact investing. A JPMorgan report estimates that more than $10 billion was invested by impact investors in 2013, with a significant amount of that total invested in Africa and especially Kenya. Last month, M-Kopa raised $20 million in new capital from investors, including The Bill & Melinda Gates Foundation, Gray Ghost Ventures and The Shell Foundation. The company’s financings include debt, equity and grants and this latest round is intended to support their growth to an installed base of 1 million households by 2018.

To learn more about M-Kopa Solar, check them out here!

Critics suggest that the rise of the “Silicon Savanna” is not sustainable due to the coming and going of many expats (especially recent college and business school graduates who swarm to Nairobi) who see their work as a short-term learning experience rather than a long-term commitment to building real businesses. However, there are more and more examples each year of entrepreneurs building compelling businesses that have every indication of contributing to the long-term growth in the economy while reducing poverty and stimulating development.   From for profit public health clinics (Penda Health) to private schools (Bridge International Academies) to solar lamps (Greenlight Planet), the activity of do-gooders continues to grow.

Many of our SEI graduates have worked in and around Nairobi over the last few years. Some have worked with existing social enterprises, and others developed their own. Many reads will recall Njabini Apparel and Mike Behan’s efforts to make a difference in the lives of poor women in rural Kenya. Myles Lutheran continues to do great work at EcoFuels Kenya. Sean Smith worked at Invested Development’s Nairobi impact investing office after graduation; Sarah Hodson also worked in Nairobi’s start-up scene during her time at NU; Nele Grossman worked with the clean cook stove project in the Kibera slum for The Paradigm Project. Each would tell you that the challenges, and risks, of living and working in Kenya are many but in the end worth it in order to feel the excitement and passion.

Our thanks to Karen Weise for excellent reporting from Nairobi (Bloomberg Businessweek December 29, 2014 “The Do-Good Startups of Nairobi”) that informed this piece. 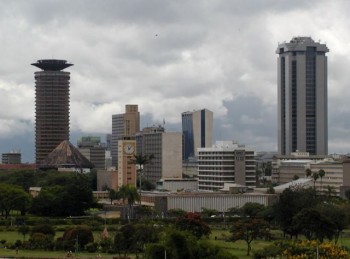