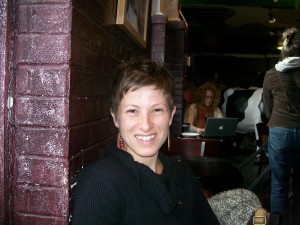 On Thursday,  January 30, our Scholars Seminar on Research and Innovation featured Jessica Taubner, the current Chief-of-Staff and former campaign manager for Councilor-at-Large Ayanna Pressley, the first African-American City Councilor in the history of Boston. As Chief-of-Staff, Taubner has worked closely with Pressley to set a very progressive and sometimes controversial legislative agenda, which includes forwarding new laws on sexual health education, advocating for an increase in the state's minimum wage, and working to ensure that people of color and women are given first consideration for city development jobs.  Taubner, who holds a Masters of Public Health with a focus on child and maternal care, was named the 2012 Local Campaign Manager of the Year by the American Association of Political Consultants.  Taubner shared her experiences as a community organizer, political activist and campaign manager, which inspired Scholars to become more involved with their surroundings and, when possible, strive to make a difference.  She also discussed the challenges of governance in Boston and, in particular, of promoting greater popular participation in local politics.  Finally, Taubner described some of the most pressing issues on the city's legislative agenda.  Following her lecture, she fielded several Scholars' question, which ranged from on income inequality and maternal/child health to youth policies, disbursed generous career advice and encouraged the audience to find ways to contribute their exceptional talents to the city, and the world at large. As national politics becomes increasingly polarized, cities are places where things get done – our  “laboratories of democracy.”  With Jessica Taubner, Scholars had the chance to meet one of the key people who are currently “experimenting” within this increasingly relevant political realm.  As one scholars wrote: "meeting Jessica Taubner might actually restore my faith in (at least local) politics!"  A video of Jessica Taubner's session is available to scholars on our Seminar's blackboard site.