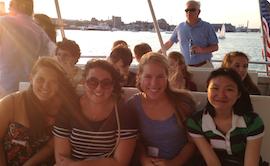 For the first group gathering of the University Scholars, we took a sunset cruise to Spectacle Island, one of the Boston Harbor Islands. The Boston Harbor Islands Pavilion was designed by Northeastern Professor of Architecture Tim Love (his design recently won an American Institute of Architects Award), while the National Park Service audio guide you'll find there is narrated by none other than the Scholars Faculty Fellow, Professor Bill Fowler.  The trip offered the Scholars the opportunity to get out on the town and to enjoy some lovely weather. Spectacle Island was a wonderful place, too, to look back on Boston, while looking forward to the years the Scholars would be spending in the city. We enjoyed a traditional New England clambake -- lobsters, clams, corn and chowder -- on the spot and watched as the sun set. 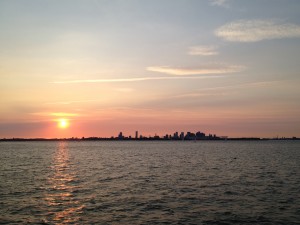 The sun sets on Boston, from Spectacle Island.

Our group was lucky enough to be joined by Professor Peter Rosen of the Department of Earth and Environmental Science, an expert on the environmental history of Spectacle Island who serves on the Boston Harbor Islands National Park Advisory Council. We were also joined by a number of faculty mentors -- Professor Erin Cram from Biology, Professor Daniel Faber of Sociology and Environmental Studies, and Professor Greg Goodale from Communication Studies. It was a tremendous evening and an auspicious beginning to our adventure together.