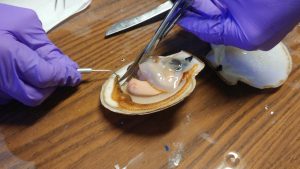 The SIRF I chose to be a part of explores the effects of treatments of ocean acidification on microbial communities and their host associations with deep sea scallops. As a consequence of climate change, rising atmospheric CO2 dissolves into the world’s oceans and causes seawater pH levels to decrease in a phenomenon called ocean acidification. Compounded with increasing sea surface temperatures, these environmental changes are stressful for many marine organisms. Despite marine microorganism’s vital role in primary production, food webs, and ecos ducted high throughput DNA sequencing in order to obtain information about diversity and the structure of the host-associated microbial communities. We found that the beta diversity of the communities in the mantle and the shell samples were distinct based on sample type. We also found that microbial communities in the shell samples were significantly different among both pCO2 and temperature treatments, and they were different when the two treatments we re combined. There was, however, no difference in alpha diversity based on these treatments. In contrast, the mantle microbial communities did not show similar treatment based patterns in alpha or beta diversity. The difference in the beta diversity of the shell and the mantle communities could be a result of the sea scallop regulating internal conditions in the mantle. However, more research must be done in order to verify that the difference in these microbial communities was not preexisting the treatments. Further studies should also perform similar experiments on microbial communities in the gill and gut of sea scallops, to determine if the scallop controls the pH of its mantle environment differently than the gill environment. Investigating microbial community response to environmental stressors associated with climate change consequences is essential to understanding host (particularly economically important species like the sea scallop) and ecosystem resilience and adaptation in the future.

Starting this project I had no way of knowing how much it would challenge me over the months I would work on it. I had been working in the Bowen microbial ecology lab for six months already and I already knew most of the techniques that I would be using to complete the lab portion of my experiment. However at the time that I started the project I had no idea about the work and commitment it took to see a project from beginning to end.

The first challenge was not creating a hypothesis for my project, but understanding that the vision that I had was sometimes to feasible and learning how to rework my original ideas for my project to be better suited for reality. For example, my project was piggybacking on the preexisting experiment of a colleague and PHD candidate because she already had the ocean acidification and temperature treatments set up. Because of this, I had to limit the sampling I did so that I wouldn't disturb the scallops involved in her experiment. I had to learn to have a more flexible schedule and to take whatever samples I could get.

Another challenge came at the data analysis portion of my project. I had done much of the experimenting in the lab conditions before but I had never had produced my own data analysis, I was incredibly out of my own comfort zone and I did not even have the correct vocabulary to know how to ask for help. I slowly made sense of the coding by attending coding boot camps and asking friends of mine to explain it to me simply. Once I had more confidence I was able to ask questions and make progress.