I departed for a summer of 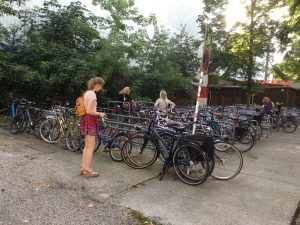 research in Berlin with rather naive expectations. I had just spent months reading analyses of the city’s bicycling boom, and envisioned a homogeneous mass of stern Soviet architecture and fashionable Berliners on bikes. Meghan, my research partner, and I had a month and a day to survey each street in eleven districts of Berlin, to explore the relationship between available bicycle storage infrastructure and a neighborhood’s development status. This seemed like plenty of time, and eleven districts seemed nearly superfluous.

Soon, I realized that Berlin operated on a completely different scale than Boston and with diversity that we were not used to. During our first few days, Meghan and I surveyed the districts of Kreuzberg, Schönholz, and Neukölln, which were all well inside city limits and within an hour on the bus and tram from our apartment. In Kreuzberg, we had to push our way through streets congested with pedestrians, trying not to stumble over bicycles chained to signposts where no bike racks existed. In Schönholz, the provided 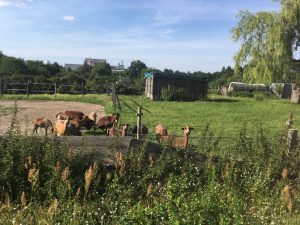 bike racks appeared to be so rarely used that the grass around them was overgrown - it was quiet and suburban, with single-family homes that each had a car in the driveway. In Neukölln, I found myself on a dirt road, with bleating goats on my right and a wooden cottage on my left - and naturally, not a bike rack for miles.

Not all neighborhoods surveyed were so dramatic, but the amount of variation between surveyed districts posed an unexpected challenge in our research. How could I compare the bike rack data of the different neighborhoods as if their development status was the only factor affecting them? I had hoped for a clear correlation between facilities and development status. Of course, sociological research rarely ends so neatly. It’s important to isolate one variable to test, but when surveying neighborhoods, this wasn’t possible in the same way as it was in my physics lab at school. 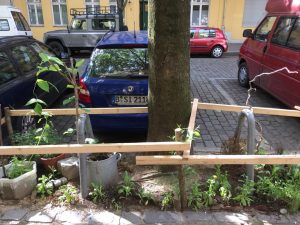 dramatic differences were overwrought. Meghan and I decided to count the bike racks as planned, but also made careful observations in each neighborhood to determine other potential reasons that the provided infrastructure was extensive, lacking, or in between. Our results confirmed our suspicions: development status was a significant factor in the number of bike racks in a neighborhood, though other factors played a large role. This consideration of other factors led Meghan and me to think about the neighborhoods critically instead of classifying them as ‘rich’ or ‘poor’ and never looking more closely. Berlin’s diversity enriched our research and experiences, and I am grateful that I was forced to explore the reality of the city rather than mindlessly affirming my initial expectations.