This experience has proved just as incredible, if not more, than my time in India last summer. As a researcher and not an actual student on the dialogue, I had “significant autonomy” as we jokingly said. Our first week, in Singapore, proved extremely fascinating and thoughtprovoking.

Rachel and I are researching perceptions of flooding and flood risk management in Singapore, Jakarta, and Bali. As a coastal equatorial community, Singapore is extremely vulnerable to the effects of sea level rise, yet is this model city for flood control and urban development. A visit to the Urban Redevelopment Authority (which I LOVED) shed some light on Singapore’s success and rapid modernization.

At the URA, we learned about the Concept and Master Plans, which dole out detailed development plans fifty and ten years in advance. Such unopposed government authority comes with sacrifices, but also with extreme effectiveness.

Much of Singapore is reclaimed land; with these plans the government plans future reclamation and development on that land, ensuing its stability. The flooding infrastructure of Singapore is absolutely fascinating, with a complex drainage system. Singapore Bay, formed with reclaimed land, acts as a reservoir for drainage waters from the far reaches of the island. In the rare event that floods occur, they drain out within a few hours. I’m a sucker for flooding infrastructure now.

The methodology of our project has included surveys and interviews. We spent a good deal of time in malls and on street corners having passerby take them. Having conversations with local people and hanging out in public places was not something we got to do much in India and it was fantastic.

Surprisingly, a lot of Singaporeans didn’t understand why we were giving out flood surveys. 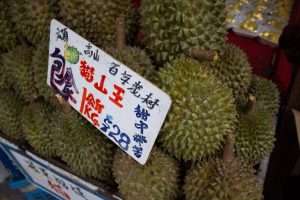 In general, people were not aware of flooding or climate change issues in Singapore. This subject of climate change apathy came up several times in India and is a huge problem in the United States. Singapore, however, is known as this forward-thinking and innovative hub so it was surprising to learn that climate change apathy is still so widespread. Rachel and I talked about it at length with a professor at the National University of Singapore.

We discussed this idea of a knowledge action gap: in many cases, people know climate change exists but don’t take any action against it. Generally speaking, people will hold the actions of others attributable but not their own. Surveys have consistently shown that people believe in climate change but not that it will ever affect their own lives.

So how can we make more people care enough to change their harmful actions?

We talked about this idea of real-time feedback. A Swiss study showed that when shower heads were equipped with devices displaying the temperature of the water, real time, showers were longer. When the devices also showed the total energy consumption of the shower, real time, shower time was significantly reduced. Only when people were given real-time feedback showing the consequences of their actions did they modify those actions.

An INCREDIBLE lecture from a professor at Yale NUS College left me with some new ideas about social media and the dissemination of scientific information in today’s modern age. With increasing access to information, we as individuals have more power to teach other. Dr. Hsu specifically mentioned blogging, which warmed my heart a little and has inspired me to use this to teach others as much as I can about what I’m learning (hence the informative nature of this post).

I’d like to urge you as well to do what you can to share knowledge that is important with others.

Let me go backwards for a second. Jakarta is actually the flood capital of the world. The land is rapidly sinking (up to 25 cm per year in some areas), largely due to excessive groundwater depletion. This, in combination with sea level rise, has increased the frequency and severity of floods around coasts and riverbanks in recent years.

The solution to flooding in Jakarta requires cooperation between stakeholders, government, and scientists, and is far from simple. The conference proved just that. Government corruption is at play in Jakarta, which only complicates matter further.

Already, residents of several coastal kampungs (community villages) in the city have received eviction notices. Kampung residents are reluctant to relocate to the expensive and far provided housing, as their livelihoods often rely on their coastal locations and community networks are so strong. How can Jakarta keep kampong communities intact in these vulnerable areas while adequately addressing the issue of flooding?

At the conference, we heard from one very inspiring kampung leader. When they received eviction notices, the community banded together to educate themselves, and they moved their homes a few meters further from the coast.

This is an example of citizen science, a newly emerging field in which non-scientists conduct scientific research/endeavors. This was not the first time on this trip that we’ve discussed citizen science and it is a topic with which I’ve become fascinated. At the conference, we heard from a group that is using tweets to track the progress and location of floods in Jakarta, real-time. Back in Singapore, Rachel and I had an interview with someone who works with International Coastal Cleanup Singapore. When groups want to do beach cleanups, they contact the organization, which decides which location needs surveying, sends them there, and has them collect data while they clean the shore. The idea of ordinary people aiding scientific progress excites me and could be a game changer in terms of flooding in Jakarta.

The conference left me a bit discouraged, as the issue is so convoluted and daunting. If we had more time in Jakarta, we would have wanted to go to every single kampung and speak to every single person at the flooding conference at length to better understand the multifaceted issues at play. I am now even more eager to learn about the issue from multiple perspectives and continue this research project after the trip is over.

As in Singapore, we planned on surveying in Jakarta, with a goal of one-hundred responses. Here, the sheer vastness of the mega-city, coupled with the language barrier, had made me quite intimidated about surveying.

We went to Bukit Duri, a riverside kampung in East Jakarta, with my friend Simi, who goes to Northeastern but lives in Jakarta. One of Rachel’s friends had already translated our survey into Bahasa Indonesian. Simi helped us translate and convince people to take the survey. She wrote down a line for us to say, and Shahd and I went off, reading it to people and hoping they would take the survey. 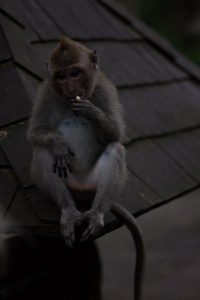 Without fail, the process went as follows: I went up to a person and struggled to read the line to them. They then took the paper from me and read it over with their friends, laughing at my clear lack of understanding. I showed them the survey, pointing at the individual questions. They took the clipboard, and took some time looking at the questions and discussing with their friends. Then they’d ask for a pen, and fill it out. Surprisingly, getting people to respond was much easier in Jakarta than it had been in Singapore. I don’t know if it was because they felt bad or because they were intrigued, but I’ll take it either way.

I appreciated visiting the kampung twice over two days and getting to interact with people living there. They often knew bits of pieces of English, and I learned a few words in Indonesian, and we had some interesting conversations. The people in the classes on the Dialogue didn’t get to venture much out of the classroom during our time in Jakarta. On an even greater level, I felt so thankful for what I have, especially after suicide bombers killed three police officers less than a mile away from where we were the evening after our second day of surveying.

We got out of the city a bit on our last day and ventured to a mountaintop paragliding point, where I made a glorious investment into a new selfie stick, and a coffee/tea plantation, where we were treated to a delicious Indonesian lunch.