Northeastern’s Alternative Spring Break program has been kind to many- it has forged the connection between our worlds, as college students, and the worlds of so many individuals that burst the bubble of homogeneity that we are allowed to live in. We were lucky enough to engage in such an experience in Selma, Alabama, one of the homes of the Civil Rights movement.

50 miles west of Montgomery, located in south central Alabama is the city of Selma. Selma is a sight of historical consequence to American civil rights, known for the 1960s Voting rights movement and the Selma to Montgomery Marches led by Dr. Martin Luther King Jr. Currently in Selma, housing segregation keeps poor unemployed Blacks and upper class Whites of the town separated on the East and West sides of town, respectively. An all-white private school and country club that bar blacks from entry in a town that is 80% black. White flight is also common, most recently in 2008 when the town elected Selma's first African American City Council President and mayor, George Patrick Evans. 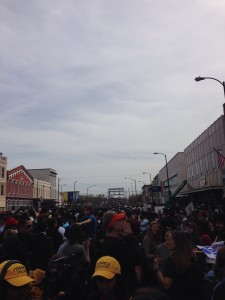 These racial tensions were divulged to us on our second day in the city, when we saw a Ku Klux Klan flier posted on a tree outside a local market. Though the social troubles of Selma are accepted by some, they are defiantly challenged by others, namely the Freedom Foundation, our service organization partner for our week in Selma. The Freedom Foundation is a non-profit organization that tackles Selma’s civil rights history and contemporary challenges of racial inequity through education programming and youth outreach. Our trip came at a unique time: the 50 year anniversary of Bloody Sunday known as “Jubilee Weekend,” where President Barack Obama spoke in Selma along with American politician and civil rights leader John Lewis. As Obama connected the struggles of Selma to contemporary racial bias and policing seen in Ferguson, he declared Selma as realization of American opportunity and the power of youth-driven change. His words primed our week and our group’s understanding of “Selma is now.” 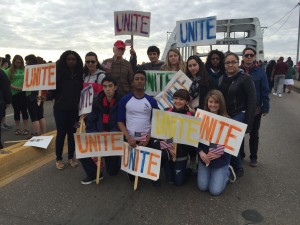 One of the issues brought up during the week was that this experience was structured much differently than other volunteer opportunities and Alternative Spring Breaks trips. While other programs focused on hands-on service, we delved into the culture of the city through tours, and historical lectures. However, at the end of this experience most were in agreement that this trip was structured in the proper format. Had we gone into Selma and volunteered, with no background knowledge as to what living in Selma entails, we would have been doing a great disservice.

The day after we arrived, the Freedom Foundation’s youth action organization, Students Unite, led Alternative Spring Breakers in a morning justice march across the Edmund Pettus Bridge, to have the name changed. Named after a prominent Ku Klux Klan leader, the bridge remains a symbol of hatred for some. However, we found that many of Black members of Selma did not want the name to be changed. This stemmed from the older generation- those who marched in Bloody Sunday and experienced the Civil Rights movement firsthand- fearing that changing the name of the bridge would affect the nation’s memory of what occurred in Selma. The day came to its peak when our group was interviewed by the LA Times, commenting on our immediate experiences in Selma and it’s relevance to modern civil rights issues. However, while we were thrilled by this opportunity, the knowledge that we had only arrived the day before and were asked for our opinions on a city with which we were unfamiliar, while the residents of Selma were given no outlet for their collective voice in their own community, was disheartening. 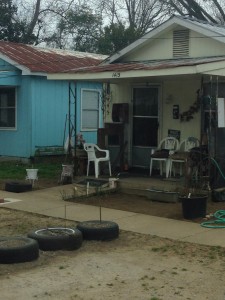 Through the efforts of the Freedom Foundation, our group was humbled to meet and hear the stories of civil rights foot-soldiers Jimmy Webb, youth leader trained in non-violence, and Lynda Lowery, the youngest person to march from Selma to Montgomery. They discussed social change as requiring direct action based in reconciliation rather than destruction, echoing King’s larger philosophy as modeled after Ghandi. Taking in this richness in history aided our group with understanding of forces influencing youth education in Selma. Our work involved playing with children, reading and writing help, storage room cleanup, and general discussion and engagement with the older kids. We saw resources underused, teachers overworked, and school settings understaffed. The psyche of Black Selma youth is historically important: in 1965, the youth of Selma helped drive the voting rights movement, participating in the Selma to Montgomery march and Bloody Sunday. From what we saw, that image has changed drastically. The Black youth of Selma are now eager to escape, and pursue life outside of a town that offers them few opportunities. Within the school system, extracurricular activities are limited, and the few that are offered seen as a joke.

Amidst this negativity is the Freedom Foundation’s entertainment and theater organization RATCo! which provides a space for youth in Selma to find respite through dancing. Hearing the stories of RATCo!, kids who came from the drugs and violence of Selma to the Freedom Foundation as a way out was extremely powerful, denoting the impact youth mentorship and engagement could have on transforming Selma. 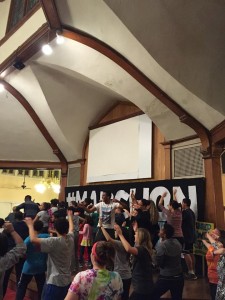 Change in Selma is found when we reflect on its civil rights success to revitalize the community, uniting against the present forces of racism and inequity. Our week was filled with shock, dismay, and hope for progress in the future. Selma has progressed since the Civil Rights movement, and while it is not where anyone would hope for it to be, the process has begun. This trip was fueled by the passion that the Freedom Foundation has for educating youth in and outside of Selma. As we boarded the plane to depart for Boston, our team wondered what our role is, and what our role can be. The truth of the matter is, we need to take what we learned in Selma and apply it to our daily lives. Whether members from our trip choose to go back to Selma and work with the Freedom Foundation, as many volunteers at that organization do, or use this trip as a way to recognize cultural differences and privilege is now a personal decision. As outsiders, our week in Selma was not enough to impact the larger issues, but we believe that our team shared one sentiment at the end of the week- Selma’s community and history has provided us with more than we can ever reciprocate.