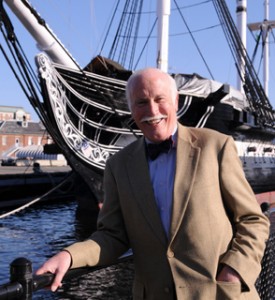 Distinguished Professor of History Bill Fowler in front of the USS Constitution.

On Thursday, January 23, our Scholars Seminar on Research and Innovation featured our own Faculty Fellow, Distinguished Professor of History William Fowler, who delivered a lecture entitled: "America's Sacred Scripture: The Declaration of Independence."  Professor Fowler is a wonderful storyteller who has studied and worked at Northeastern in a variety of research, teaching, and administrative capacities for a number of years. During this time, Fowler has written and edited ten books and produced over 50 scholarly articles. His work has primarily focused on Early American history, particularly maritime history and the history of Boston, from the period of European colonialism up through the founding of the Republic. A public intellectual, Fowler has written extensively for the popular press and has served on the boards of organizations throughout New England; he serves or has served as the Director of the Massachusetts Historical Society, the President of the New England Quarterly, the Chair of the Old North Church Foundation, and the Chair of the WGBH Community Advisory Board, to name but a few of his community commitments.  Prof. Fowler's lecture gave an entertaining and informative account of the making of the Declaration and magisterially illustrated the enormous influence that  America's founding document had on most constitutions that followed, from Haiti to Vietnam, and continues to have to this day -- especially among peoples who are still repressed by undemocratic regimes.  At the end of the lecture, Prof. Fowler invited Scholars to read the Declaration out loud and reflect together on its enduring significance.  An integrated video of Prof. Fowler's lecture and powerpoint presentation is available to Scholars on our Seminar's blackboard site.