University Scholars have the opportunity to apply for a Scholars Independent Research Fellowship (SIRF), which provides training and funding to carry out independent research projects. Below, University Scholar Amy Zhao, COE ’18, reflects on her experience conducting research in China this summer for her project entitled, Finding Face: The Power of Narrative through Chinese and Chinese American Voices. To read more about Zhao’s experience, visit her blog. You can also listen to her podcast about the Cultural Revolution, family, and Asian American identity. 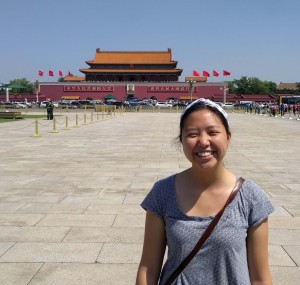 Amy Zhao at the Forbidden Palace in Beijing, China.

Huludao (葫芦岛) is a small city in northeastern China, named after the Chinese hulu, a hollow gourd a bit like the ones in autumnal Trader Joe’s displays except more significant—its doubly curved figure a story of its own. It is the city my mother’s family lives in, and in my first few days of being there, I was struck by a wordlessness at the warmth of a family who had not seen me, who I had not talked to, in over ten years.

Chinese hosting culture is incredibly generous, all-encompassing: fistfuls of yuan thrust at us, roast duck and tomato fried fish ordered for us, train tickets insisted on being bought for us, favors called in to near strangers to take us sightseeing, time spent chopping and stirring and kneading, my uncle on his knees on the hard ground rolling out dumpling skins and tortilla-like bing for us. I felt overwhelmed by it all, and I wondered if I could do the same.

My project was a personal ethnography—a project attempting to tell the stories of a family. And in Huludao so many stories were told: old family stories of growing up in Yangzhen; stories about my lihai (strong, capable) mom told by her brother (my Jiujiu) and her sister’s husband (my Yifu); stories blurring memory and truth (Yifu bragging, “Your mother tested as having the sixth best English in the province!” and my mom, over Wechat video call, “xiashuobudao”—“That’s crazy talk!”); stories of those untold (“I think Chinese families probably tell less stories than American ones, and my parents definitely do not speak of the bad,” my cousin’s wife told me, on our way into the Forbidden Palace); stories imagined with another cousin’s adorable 2-year-old daughter, nicknamed Yaya, who has an uncanny resemblance to Boo from the movie Monsters, Inc. 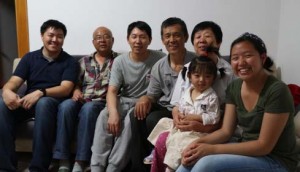 In Huludao, my name is Quanquan, a name I forgot I had. (Isn’t that odd? That our names are tied to places and memory, and sometimes we forget the names by which we remain in others’ memories...) Along with their proper names, Chinese children are given nicknames upon birth, and mine was, is, Quanquan. My brother’s nickname is Yuanyuan; together, they mean whole.

Sometimes speaking Chinese comes natural, like slipping back into happy comfortable syllables, which ring with home. Other times the words in my mouth feel clumsy and unfamiliar and restricted—how I feel in China sometimes. But hearing my name, sitting in jiang gushi circles (talk-story circles), I felt at peace, like perhaps there were pieces of my Chinese American identity being made whole again.