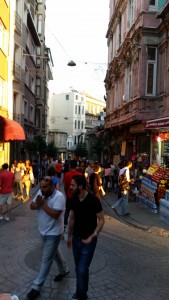 Alexander Kavourias, CCIS '18, reflects on his experience with the University Scholars Dialogue to Istanbul and Berlin.

When I decided to sign up for this Dialogue, I anticipated that my trip to Istanbul would fall somewhere within the general lines of the tourist experience.  I would see the historic old city, visit a few neighborhoods, experience the nightlife, attempt to interact with locals, and savor some of the local cuisine.  Of course, I was aware of Turkey’s proximity to the Syrian conflict and the approximately four million refugees that so far have fled to the Turkish border.  Yet, while strolling down the famous pedestrian boulevard called Istaklal street, I found myself face to face with the embodiment of the disastrous outcomes of the Syrian civil war.  Even more surprising, this wasn’t an isolated circumstance.  On two separate occasions I met restaurant waiters, both about the same age as myself, who were illegally in Turkey and yet willing to openly share their stories with an American tourist.  I didn’t even need to probe or ask questions, both individuals were eager to share their stories with a group of strangers.

Coming from New York, a place where people are wary to even share their names with strangers, I am amazed that two individuals on two separate occasions would openly share information that could lead to their arrest.  Why is it that my identity as an American made these two individuals so trusting of me?  They were both about twenty years old, spoke fluent English, and were forced to put their higher educations on hold after leaving Syria.  It leaves me wondering how many other refugees are out there, illegally living in Turkey, who are hoping to one day restore some semblance of their past lives.  My first encounter with a refugee was the more surprising of the two.  This waiter approached the group that I was with and asked if we wanted a table.  He then realized we were American from our English response.  I didn’t do much of the talking, however; I did listen in on the conversation.  Almost immediately, this unnamed waiter started to share with us his elaborate plan to continue his journey and hopefully end up in the border-free area of the European Union known as the Schengen zone.  His plan was to follow the common path of entering into Greece, walking across the border into Macedonia, and then continuing through Europe until he reached Austria, at which point he would apply for political asylum. Our second encounter was very similar; we met a waiter who had fled the conflict and ended up in Istanbul and had aspirations of making his way to the rest of Europe to finish his degree in economics.

These encounters were eye opening for me as an American and as a university student.  I realize now that my experience in Istanbul is rather insulated from the actual experiences of many of the city’s residents.  I am staying in a beautiful hotel in one of the city’s wealthiest areas and am not enduring some of the hardships faced by not only Syrian refugees in Turkey, but also the less privileged portions of Turkey’s population.  As a university student, I realize how quickly my life plans can be put on hold by political turmoil.  Both waiters were forced to cut short their degrees due to factors that were completely out of their control.  I could only empathize seeing as nothing I have experienced in my life has been as disruptive and disastrous as being caught in the midst of a civil war.

These two experiences left me with a legitimate feeling of guilt and remorse.  It’s difficult to hear the details of an individual’s tumultuous experiences and to be unable to provide any help.  We wished our waiters on both occasions the best of luck, left a generous tip, and continued on with our nights.  Especially after the second encounter, my seemingly never ending bliss while staying in Istanbul was temporarily replaced by a strong feeling of helplessness.  Of course, I now realize that my experience in Istanbul would be incomplete if I don’t come face to face with the harsher truths of what it means to live in Istanbul.  The tourist experience in any city often feels manufactured and artificial, especially when there is a language barrier that prevents you from interacting with locals.  You never truly understand what life is like in a new place until you are able to speak to the locals and hear their experiences first hand.  Personally, when I look back on the most impactful experiences during my time in Istanbul, I will look to these encounters.