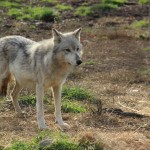 Wolf in the sanctuary. 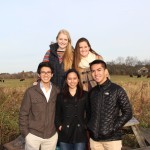 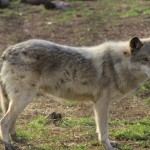 On Sunday the 9th of November, members of Professor Darien Wood's Pack went on a trip to Wolf Hollow in Ipswich. We left Northeastern University at 10 AM and after an hour bus ride stopped to refuel ourselves at the Clam Box of Ipswich Restaurant. Everybody enjoyed the traditional New England fried seafood and chicken they offered. We then made our way to the Wolf Sanctuary where Mr. Sofron, the Assistant Director of Wolf Hollow, spoke about the different wolves in the sanctuary. We learned about how a wolf pack functions, as well as the importance of the wolf in the wild. Mr. Sofron wanted to teach us how wolves are a benefit to the environment around them and also to us humans, especially because there are so many parallels to our own family structure. Through education, Mr. Sofron hopes to create an appreciation for wolves as a lovely rather than dangerous creature- a common misconception most people have.
We were able to observe a pack of six wolves, which included the alpha female wolf mother, Nina. She could be easily identified, as she was clearly in charge of the pack. When food (a pumpkin filled with meat) was given to her, she had to defend herself against the other five wolves, who also wanted a share. Something we found very interesting was when Mr. Sofron sprayed different perfumes on the ground, three wolves started to roll in it. He explained that the wolves did this help carry the smell back to the pack, in case the other wolves had not smelt the pungent smell.
Overall, the trip was  an educational eye-opener to the world of wolves. A trip to Wolf Hollow is definitely worth it!
By Fenna Hasche & Alyssa Caganda