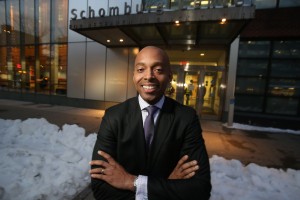 Prior to last weekend, I had never been to a conference. I’ve always thought professionals view them as means to an end – the end being free giveaways, open bars and the freedom to explore New Orleans, San Francisco, or wherever else to the heart’s content. That said, I was surprised when minutes after I arrived at the Association for Black Culture Centers Conference, a small group of drummers and dancers burst into the conference room.

In addition to that performance, the conference featured a step dance show, thought-provoking workshops, and five keynote speakers. I was able to attend three of the five keynote addresses, and they impacted me most. For the sake of brevity, I’ll only highlight Dr. Khalil Muhammad’s speech; though each speaker contributed to the feelings I’m experiencing now. Dr. Muhammad is the director of the Schomburg Center, which is the nation’s largest collection of documents pertaining to Black American culture and history.

Dr. Muhammad began by examining post-Reconstruction incarceration rates. He told us that in 1890, Black people accounted for 12% of the U.S. population and 30% of its prison population. Arrest statistics were taken out of context, as statistics often are, and used to portray Black citizens as threats to society. However, the work of intellectuals like Dr. Muhammad and Michelle Alexander has taught us that social dynamics and Jim Crow policies contributed heavily to the skewed incarceration rates at the time. For example, vagrancy laws allowed police to arrest any Black American without written proof of employment.

Though these examples are in a historical context, what they represent is current. For decades, the American public and policymakers have lauded iron-fisted policing in poor communities of color. Most Americans supported the policies that led to the destruction of Black families and communities. However, just weeks ago, The New York Times reported that many of these same Americans are changing their minds. Instead of discipline, they now call for rehabilitation. The difference is what you might think – the teenagers using and overdosing on drugs like heroine today are overwhelmingly white.

What Dr. Muhammad factually highlighted has been painfully obvious to me since August 2014. That the Black and brown citizens of the world don’t receive the same empathy that our white counterparts do isn’t always intentional. I believe that it’s inadvertent more often than not. However, this norm is dangerous regardless of intentions.

I hope we at Northeastern overcome the idea that racism only exists among bad people. Everyone has racial biases, and many are quite harmful. We’d do well to accept this and have honest conversations about how we can improve our dealings with race. As we watch institutions like the University of Missouri and Yale evolve, I hope we evolve with them.

More than anything, the ABCCC put me in the same room with dozens of educators and administrators working to make universities better places for students that look like me. After learning from them, I feel ready to make the most out of the road they’ve paved for me. Hopefully we can expand the road a little bit more by the time I graduate.

A huge thank you to the University Scholars Program for being generous enough to sponsor my attendance.