by Faculty Fellow and Professor of Physics Darien Wood 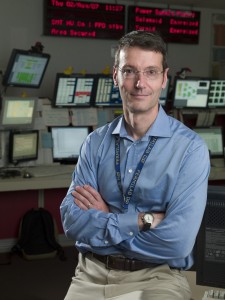 I was every excited to hear the big news today that the Nobel Prize in physics was awarded to Francois Englert and Peter Higgs.  The prize recognizes work they did almost fifty years ago on the development of the Higgs mechanism which is responsible for giving mass to fundamental particles.  Professors Englert and Higgs are theoretical particle physicists who focus their minds on finding elegant mathematical descriptions of how the universe works at the most fundamental microscopic levels.  My collaborators and I, on the other hand, are experimental particle physicists who organize ourselves in huge international collaborations to mount enormous experiments at particle accelerators to try to discover new particles and test if these theories are really describing our own universe.  It is no coincidence that the Nobel committee chose to award the prize to Englert and Higgs shortly after we experimentalist found the Higgs boson (a specific prediction of their theory) at the Large Hadron Collider at CERN in Geneva.  This prize really recognizes the important interplay of theory and experiment, and we experimentalist feel some reflected glory in the role we played in transforming the Higgs mechanism from speculation to accepted reality.

I feel lucky that I was able to witness the gradual emergence of the Higgs signal from years of data at the Tevatron and the LHC like a blurry scene slowly coming into focus.  It has been a long process.  The theoretical papers in the 1960’s - from Englert, Higgs, Hagen, Gurlanik and Kibble – gave us a nice model that predicted almost everything about the Higgs boson except its mass.  I looked through my old notes today and found a talk that I had given as a graduate student almost 30 years ago describing a way we might discover the Higgs boson if it had a mass of 15 GeV.  It turned out to be almost ten times as heavy (125 GeV) and completely out of reach of the experiment I was doing back then.  Many years later at Fermilab, I led an experiment which did not discover the Higgs boson but was able to exclude some important mass ranges for the Higgs, and this was thrilling in itself.  Now at the LHC, I am very excited about work I am doing looking for invisible decays of the Higgs boson, possibly into dark matter – looking for an excess of deficit, so to speak.

Today I travelled from Boston to Washington DC to participate in a three-day review of the Office of High Energy Physics of the Department of Energy (DOE).  On one hand, the timing is almost poetic, since the DOE, along with the National Science Foundation, was responsible for supporting the work of all of the US physicists who worked at the LHC and contributed to the Higgs discovery.  Although the LHC is in Europe, the physicists from US universities and labs make up more than a quarter of the collaborations on the LHC experiments that found the Higgs. On the other hand, the timing is ironic.  After we finish our review on Friday, we anticipate that most of the DOE employees will go on furlough due to the US government shut down.

I should make one correction.  I am not actually in Washington DC, but in Germantown Maryland, at the headquarters of the Department of Energy.  When people ask why DOE has its headquarters here, it is often noted that Germantown is one atomic blast radius away from the Mall in Washington.  DOE was formerly known at the AEC, the Atomic Energy Commission.