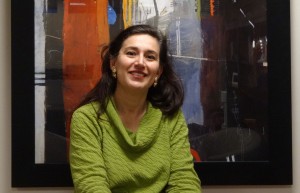 The University Scholars Program is pleased to announce the hiring of a new Associate Director, Dr. Paola Cesarini. A native of Italy, Dr. Cesarini earned her Laurea in Political Science from the Libera Universita' degli Studi Sociali in Rome. Next, she was awarded a Fulbright to study at Columbia University, where she completed a Master of International Affairs and a Ph.D in Political Science, with specializations in comparative politics and international relations. She worked at the World Bank, the United Nations and Columbia University, and taught for a decade at various institutions of higher education. Dr. Cesarini has written extensively about human rights, transitional justice and democratization in comparative perspective (with particular attention to Southern Europe and Latin America).  She is fluent in six languages.  You can reach her at p.cesarini@neu.edu

She is a delightful person who is certain to make a positive impact on our program, in our Office of Fellowships, and at Northeastern more broadly. We offer her our warmest University Scholars welcome!