Kelli Lynch, '17 COE reflects on her experience with the University Scholars Dialogue to Istanbul and Berlin.

To select and reflect upon a single experience on my dialogue to Istanbul and Berlin is difficult because there were so many. However, the Memorial to the Murdered Jews of Europe was without question one of the most thought provoking experiences of the trip. The power of the memorial was that it left so much to interpretation. While walking through the memorial, there were several themes that I started to think about and will discuss in this reflection. 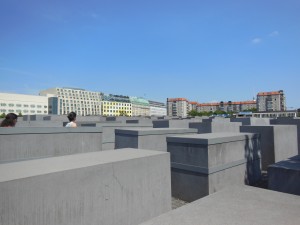 I want to start by discussing the blocks as whole and what they represent. While all of the blocks were constructed of the same material and appeared to be similar at first glance, it quickly became apparent that each block was a unique size and shape. The distinctive shapes and sizes made me think about the diversity of mankind. While at first glance a crowd of people may seem like a homogenous mixture of the same beings, closer inspection always reveals the subtle differences between individuals. One important note is that these differences are only based on appearance, much less the differences in character and experience. By representing the uniqueness of each victim, the memorial stands to defy the goal of Hitler -­‐ to homogenize and eliminate variability in the world.

Continuing with the idea that each block represents an individual who fell prey to the Nazi Regime, the simplification of individuals into blocks is troublesome. People, with personalities and families and histories, are reduced to mere blocks because of their victimization. This simplification and dehumanization runs parallel to the Holocaust. In the concentration camps, Jews and other persecuted groups were not even acknowledged as humans, they were numbers -­‐ they were pawns in a system that were meant to be used and then discarded. Going deeper, with the construction of the blocks. Each block started out as a messy mixture of concrete that had an unidentifiable shape. That concrete was then forced, against its natural tendencies, to form a block – a nice, neat block. This attempt to create order out of diversity reminds me of Hitler’s motivations and shows the danger of trying to rid the world of disorder by eliminating diversity. Diversity and disorder are a part of the human experience.

Lastly, I would like to address the way that visitors interact with the memorial. The layout of the blocks creates an ordered maze. The exits are always visible, and yet I still found myself questioning which way to turn. Soon after entering, I lost track of the people I was walking with. This made me think about how scary it must have been for the victims who were taken into the concentration camps and separated from their families. The stories of mass chaos and forced separation from family members are some of the most disturbing images I have of the Holocaust. Beyond feeling lost, the elevation change with the raising of the blocks was extremely powerful. As I moved in, it felt almost like I was being buried. The sensation of being buried was all too reminiscent of the horrible images from the Holocaust of mass graves.

Clearly, this memorial required no explanation. Instead, the Memorial to the Murdered Jews of Europe allowed for us to each have our own powerful and personal experiences.