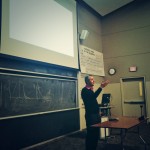 On Monday, January 13th, the University Scholars held their first Scholars Seminar on Research and Innovation. Professor Laszlo Barabasi, a physicist working in the field of network science, spoke to the Scholars for over an hour about his research in this area. From illustrious early-stage contributors to the field, to the Kevin Bacon Game, Prof. Barabasi gave an erudite tour d'horizon of network science and kindly made himself available to answer questions after his talk.  Albert-László Barabási is a Distinguished University Professor at Northeastern University, where he directs the Center for Complex Network Research, and holds appointments in the Departments of Physics and College of Computer and Information Science, as well as in the Department of Medicine, Harvard Medical School and Brigham and Women Hospital, and is a member of the Center for Cancer Systems Biology at Dana Farber Cancer Institute.  Prof. Barabási latest book is "Bursts: The Hidden Pattern Behind Everything We Do" (Dutton, 2010) available in five languages. He has also authored "Linked: The New Science of Networks" (Perseus, 2002), currently available in eleven languages, and is the co-editor of "The Structure and Dynamics of Networks" (Princeton, 2005). His work lead to the discovery of scale-free networks in 1999, and proposed the Barabasi-Albert model to explain their widespread emergence in natural, technological and social systems, from the cellular telephone to the WWW or online communities.  Barabási is a Fellow of the American Physical Society. In 2005 he was awarded the FEBS Anniversary Prize for Systems Biology and in 2006 the John von Neumann Medal by the John von Neumann Computer Society from Hungary, for outstanding achievements in computer-related science and technology. In 2004 he was elected into the Hungarian Academy of Sciences and in 2007 into the Academia Europaea. He received the C&C Prize from the NEC C&C Foundation in 2008. In 2009 APS chose him Outstanding Referee and the US National Academies of Sciences awarded him the 2009 Cozzarelli Prize. In 2011 Barabási was awarded the Lagrange Prize-CRT Foundation for his contributions to complex systems, awarded Doctor Honoris Causa from Universidad Politécnica de Madrid, became an elected fellow in AAAS (Physics) and is 2013 Fellow of the Massachusetts Academy of Sciences.  The audio version of Professor Barabasi's session is available to Scholars on the Seminar's blackboard site.