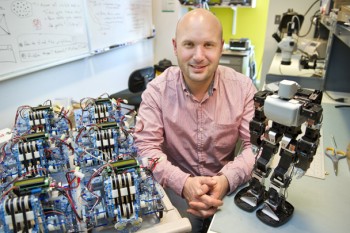 On Thursday, March 20th, the University Scholars Seminar on Research and Innovation hosted a lecture by Marty Vona, Assistant Professor in the Col­lege of Com­puter and Infor­ma­tion Sci­ence.  Professor Vona is an experimental roboticist, who examines how computation interacts with the physical world.  He received his MS and PhD degrees in electrical engineering and computer science from the Massachusetts Institute of Technology. Over the years, Professor Vona earned the 2004 NASA Software of the Year Award and the 2012 National Science Foundation (NSF) Faculty Early Career Development (CAREER).  At Northeastern, he teaches Robotic Sci­ence and Sys­tems, in which both under­grad­uate and grad­uate stu­dents team up to write soft­ware for and build prac­tical robots that can lift objects off the floor.

In his talk, Professor Vona's shared with the University Scholars audience the milestone of his distinguished professional experience. Prior to pursuing his PhD, Prof. Vona spent two years at NASA’s Jet Propulsion Laboratory in California, where he was involved in creating the science operations software that put both the Spirit and Oppor­tu­nity rovers on the sur­face of Mars. As a grad­uate stu­dent at the MIT Media Lab, Vona designed a climbing robot that could grab onto uneven sur­faces and adjust its grip based on the dynamics of its ini­tial contact. He then explained that mobility systems like those on the Mars rovers and the MIT climbing robot could be used on Earth to build robots that could travel over rubble after an earthquake or other disaster, or for driverless cars -- such as those Google is currently experimenting with.

Vona's current research merges his many academic interests and professional experiences.  It involves system-level control of articulated, and sometimes self-reconfiguring, robots and mesoscale issues in compliant actuation and reliable sensing, which could help humans on Earth travel over very uneven ground, move along the sea floor — or even the sur­face of another planet — with ease, assist amputees tra­verse rocky trails, and eventually replace us in undertaking hazardous tasks. More specifically, Vona's research attempts to merge 3-​​D per­cep­tion and com­pliant contact.  His goal is to develop soft­ware through which a robot can acquire 3-​​D infor­ma­tion about its sur­round­ings, process the data and then approach the envi­ron­ment with a cer­tain amount of “intelligence”.  This eerie Matrix-like scenario originated a stimulating discussion between Vona and the University Scholars audience.