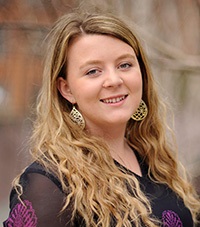 Erin Bourque, a first-year University Scholar and member of the Honors Program, has won a Critical Language Scholarship to advance her study of Russian this summer. Erin, an international affairs major and native of Dover, NH, will travel to Vladimir, Russia, for nine weeks of intensive study at the KORA Russian Language Center.

When she was a senior in high school, Erin won a full merit-based scholarship sponsored by the U.S. Department of State to study  a critical language abroad, and she spent two months in Russia studying the language. The CLS will allow her to delve deeper into Russian, which she hopes will eventually lead to a career in the Foreign Service. Since coming to Northeastern as a University Scholar, Erin has worked as a case manager at ABCD South End, an antipoverty organization, as part of the Civic Engagement Program, is an English language tutor with Northeastern University Teaching English Language and Literacy Skills, and is a Husky Ambassador Tour Guide.

An initiative of the US Department of State, the Critical Language Scholarship is a fully-funded overseas language and cultural immersion program for American undergraduate and graduate students. With the goal of broadening the base of Americans studying and mastering critical languages and building relationships between the people of the United States and other countries, CLS provides study opportunities to a diverse range of students from across the United States at every level of language learning.