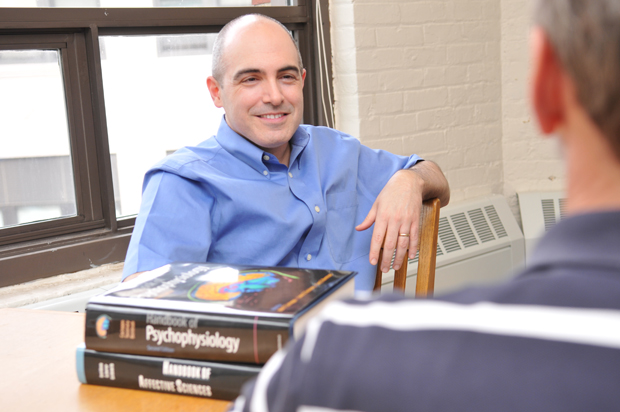 On Monday, March 31, 2014, the University Scholars Seminar on Research and Innovation hosted a lecture by Professor David DeSteno entitled: "The Truth about Trust."  DeSteno is Professor in the Department of Psychology at Northeastern University, where he directs the Social Emotions Group.  He received his Ph.D. in psychology from Yale University.  He is the author of the new book The Truth about Trust and co-author of The Wall Street Journal spotlight psychology bestseller Out of Character.  He has written about his research for The New York Times, The Boston Globe, and Harvard Business Review.  Prof. DeSteno is a fellow of the Association for Psychological Science and the American Psychological Association, for which he serves as editor-in-chief of the journal Emotion. His work has been repeatedly funded by the National Science Foundation and has been regularly featured in the media, including The New York Times, Newsweek, CBS Sunday Morning, NPR, and The Wall Street Journal.

DeSteno’s research centers on the role of emotion in social cognition and social behavior. His lab takes a multilevel and multiprocess approach to examining the psychological functions, phenomenologies, and sequelae that are associated with discrete emotional states. Current projects focus on the effects of emotions on several types of social judgment (e.g., moral decision making, risk assessment, prejudice) as well as on behaviors fundamental to social living (e.g., trust and cooperation, prosocial action, organizational behavior, altruism, aggression).

In his lecture, DeSteno explored the question of whether humans can trust each other.  It is a question that strikes at the heart of human existence. Whether we're talking about business partnerships, romantic relationships, child-parent bonds, or the brave new world of virtual interaction, trust, when correctly placed, is what makes our world spin and lives flourish. Moreover, the decision to cooperate with or trust another holds the potential not only for great communal benefit but also for great asymmetric loss. DeSteno then illustrated how his team, in cooperation with colleagues at MIT and Cornell University, was able to unlock, for the first time, several cues that allow us to read the trustworthiness of others accurately.   Using interdisciplinary methodologies including behavioral economics, social robotics, and automated pattern detection, DeSteno begun to identify the metrics by which the human mind accurately infers the trustworthy intentions (or lack thereof) of others. However, studying nonverbal behavior is of little help when the person whose trustworthiness you’re trying to assess is yourself. In that vein, DeSteno also demonstrated just how readily most people are to break promises, cheat, or give in to temptations they promised themselves they’d resist. And in so doing, he pointed out the mechanisms of our minds that allow us not only to mispredict our future behavior but also whitewash our past actions.