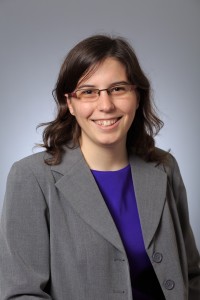 The University Scholars & Office of Fellowships is pleased to announce that Julia Ebert, a Northeastern University senior, has been awarded a Marshall Scholarship. Funded by the British government to commemorate the Marshall Plan and the special relationship between the United Kingdom and the United States, the Marshall Scholarship allows 40 "intellectually distinguished young Americans, their country's future leaders, to study in the UK" each year. Fewer than 3% of the over 900 applicants endorsed by their universities earn this prestigious and highly competitive award.

Ebert, a native of Wausau, WI, decided to major in behavioral neuroscience at Northeastern because she is fascinated by basic questions of movement and motor control. “We’ve walked on the moon,” she reflects, “but we don’t even know what’s going on in the brain that allows us to walk in the first place.”

The puzzle of motor learning—how humans learn different motor skills and how these skills are retained, lost, and possibly regained—has motivated Ebert’s stellar career as an undergraduate researcher. Ebert has worked for most of her time at Northeastern in Professor Dagmar Sternad’s Action Lab, where she is completing a thesis investigating how humans learn an asymmetric bimanual task.

Ebert’s achievements in scientific research and leadership led to her being named a Barry Goldwater Scholar in 2013. Previously, Ebert also won a DAAD Award and studied at the Max Planck Institute for Intelligent Systems in Tübingen, Germany, where she developed a parallel interest in robotics and machine learning that has led her to reframe the possibilities of her research.

As a Marshall Scholar, Ebert plans to complete the MRes in biomedical engineering at Imperial College London, where she will examine the possibility of robotic intervention and control at the interface of the brain and the peripheral nervous system, an area of research which could eventually lead, for example, to the development of mechanized prosthetics. Only 8 students each year earn this one-year Marshall Scholarship.