The following is a blog post by University Scholar Joe Tache about his experience working on a Scholars Independent Research Fellowship this summer.

I was subletting an apartment off campus this summer. My room was directly adjacent to the building next to mine, so it never got any natural light. Really great sleeping conditions.

So one morning in July, I woke up at around 10:15 - not bad for a college student during the summer, I’d argue. The problem was that I had slept through five alarms. I was supposed to meet a woman named Barbara Fields in Dorchester (about 40 minutes away by public transportation) at 9:30 for an interview. She’s retired now, but she worked in the Boston Public Schools’ Office of Equity for most of her career. She’s very well respected in education circles around the city.

I didn’t have Ms. Fields’ phone number, so I checked my email in a panic. She had emailed, wondering where I was. “Do we have a mix up? Please advise.”

I laid in bed for ten more minutes, muttering various insults to myself, before I sent her an email to tell her I was “so, so, so sorry.”

She accepted my apology and agreed to try meeting up on the following Tuesday - but this time at 11am. I can’t blame her.

On Tuesday morning, I made my way to Dorchester. I had cooked up a plan to redeem myself. I was going to apologize one more time, pay for her lunch (we were meeting at a bakery), and try to be generally pleasant. Admittedly, it wasn’t too wild of a plan.

When I found Ms. Fields, I apologized right away. She told me not to worry. She ordered a good quiche on the day I blew her off. We ate and talked for about an hour before I officially started the interview. She’s fantastic. She told me about her personal life (dealing with racism growing up in North Carolina and then in Boston), about her professional life (tirelessly advocating for students of color for decades), and anything in between. I just sat there absorbing everything.

Then, after a couple hours, it was time to pay the check. Part two of my plan. I told her lunch was on me. She told me I was wrong. That not only was I forbidden to pay for her lunch, but that she was paying for mine. And that I had to respect her wishes because she’s my elder.

My plan was foiled. But it gets worse.

As we left the bakery, she asked me where I was going. I told her I’d be taking the bus and then transferring to the T. She told me that’s silly - she could just give me a ride to the train stop. On the ride, we talked about more casual things. She was driving a rental car and she thought the person who drove it last had smoked in it. I agreed. She told me that there are no places to go out and dance to really good music in Boston. At the time, I had only been 21 for a couple of weeks, but based on what I had seen up until then, I agreed. For what it’s worth, I still agree. Finally, she dropped me off at Forest Hills Station and wished me the best, offering her support if I ever need it. I thanked her, apologized one last time (I couldn’t help it), and went on my way home.

So I overslept, missed our appointment, and wasted her time. In response, a few days later, she graced me with incredible conversation, paid for my lunch, and gave me a ride to the train, so that my commute home was earlier.

Now, why was I even interviewing Barbara Fields? My friend Prasanna and I spent the summer researching how the crack cocaine scare and the War on Drugs impacted (and are still impacting) Black communities across the US, and particularly in Boston. We’ve read books and articles and archived news stories. But most importantly, we’ve interviewed people. Many of whom are Black people who lived in Boston during the 80s and 90s, and who remember something about how the era impacted them and/or their communities - whether through crack cocaine, policing practices, incarceration, or something else. 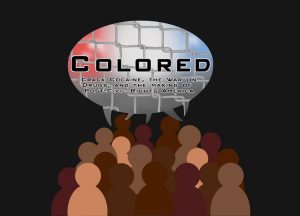 Barbara Fields is one of incredible those people. I could write a lot more about her, just as I could write a lot about each person we interviewed. And if that interests you, you’re in luck. We turned what we’ve learned about the 80s and 90s into a podcast series - Ms. Fields is in episodes 5 and 7.

It’s called Colored: Crack Cocaine, the War on Drugs, and the Making of Post-Civil Rights America. You can listen to our episodes on our website (www.coloredpodcast.com), on Soundcloud, or on iTunes.

This project has taught Prasanna and I about much more than just drug policy. We’ll carry the overarching lessons we’ve learned with us for a very long time. I hope we’re able to share that with all of you through our podcast.