Our 2012 University Scholars cohort has just completed their first co-op. In this series of articles, we will feature some news from them about their experiences and what they learned. 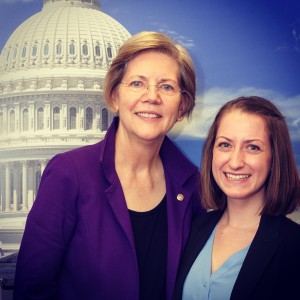 The minute I set foot on Northeastern’s campus my junior year of high school, I knew something was different about the school. But it would take me almost a year to realize that difference was something I wanted to be a part of. Now finishing my sophomore year at Northeastern, I can honestly say the decision to join the University Scholars program and be a part of the larger Northeastern community was the best decision I have ever made.

If you had asked me a few years ago what I wanted to be when I grew up, I would half-heartedly tell you I was going to be a doctor or a scientist or a medical examiner. I would have done a good job convincing you I was serious, but somewhere deep down, I knew if I went down one of those paths I would spend the rest of my life convincing others and myself that I really did love what I was doing.

I started off at Northeastern as a biology major, but also with an internship on Elizabeth Warren’s campaign for US Senate. I had always been passionate about politics, my dad is an elected official back home and I grew up knocking on doors, but I always thought it was something I liked because I liked hanging out with my dad. A month into freshman year however, I sat down with Governor Michael Dukakis for dinner and as he regaled us with stories from his many years in public service, I was sold. I quickly changed majors to political science and I haven’t looked back since.

That first semester at Northeastern really shaped the rest of my time at the school so far. I became involved with local Massachusetts and Boston politics, despite not having grown up on the East Coast. I was able to get hands-on social science research experience through the University Scholars program and became passionate about the topic of mass incarceration and our criminal justice system. The following semester I interned with the Massachusetts Women’s Political Caucus, an organization helping women get involved in the political process and encouraging them to run for office.

That experience was very eye-opening and got me thinking about the extra hoops I would have to jump through if I ever wanted to run for office myself, just because I am a woman. Nonetheless, when the Caucus asked me to join them for another semester, I jumped at the chance to help women running for local offices in Boston and again get campaign experience.

Elizabeth Warren has been a big inspiration for me ever since her campaign back in 2012. She is someone to whom I look up to, both as a politician and as a woman. She is someone that makes me want to say, “I want to be just like her when I grow up!”

I was incredibly fortunate to be offered an opportunity to be an intern in her office in Washington, DC for my first co-op. Not only have I learned so much in my six months in the office, but I have been even more inspired to get out there and fight for students and working class families because of it. Working as a press and legislative intern in a Senate, I have gotten to see the behind the scenes work that goes into speeches, policy decisions and the public image of a United States Senator, and have even gotten to be a part of all those pieces. When she speaks on the Senate floor or at a press conference, I feel proud that I have gotten to play a little role in the important work she is doing.

This experience has taught me a lot of about the federal government and my own goals for the future. I was pretty sure I would be confident in choosing to go into state politics after this experience, but now I’m not so sure. I’ve gotten excited about the idea of working for the US government and have already started thinking about what I want to do for my second co-op. Top contenders right now are the White House or the State Department at one of the US Embassies overseas, so we’ll see!

Northeastern has exceeded every expectation I had and has provided me with some of the most incredible experiences and I know there are more to come. So many of these opportunities would not have been possible without the University Scholars program, to which I will be forever grateful. Thank you for an amazing two years, Northeastern, and I can’t wait to see what the next two have in store!