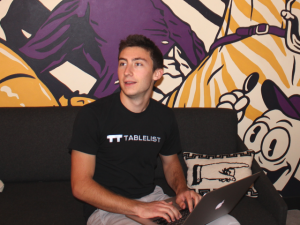 Opportunity is the single biggest gift one can receive. It is the foundation upon which, with hard work and complete dedication, goals can be reached and personal greatness can be achieved. These chances are often shrouded in difficulty and, as Thomas Edison bluntly put it, “dressed in overalls and looking like work”. Nevertheless, given the chance to perform, success is only limited by oneself. It is a vast field of opportunity that I have come to identify as Northeastern University’s most important offering.

I can still clearly remember the first time I was properly introduced to Northeastern. I had taken a few days off from a busy Spring semester during my junior year in High School, and had come to Boston to tour a number of colleges. As I first set foot on Northeastern’s campus, I was neither blown away by the landscape nor wowed by the school spirit. However, as I began my engineering introductory tour, I quickly noticed a trend that still resonates today. I noticed an unwavering focus on supplementing the in-classroom facet of education with real world experiential learning opportunities. Whether it be in the business world through the co-op program, in the research world through any of Northeastern’s countless laboratories, or even in the civic engagement world through Northeastern’s many community oriented programs; Northeastern firmly encourages each of its students to step off the college campus and broaden their education. Furthermore, the school provides an unparalleled level of support in helping its students reach these goals. I immediately knew it was an environment I wanted to be immersed in.

A year and a half after that exploratory college visit, and after being lucky enough to be admitted into the University Scholars program, I began my time at Northeastern as a Chemical Engineering major. I quickly realized, with some help from resources provided by the Scholars program, that my passions laid more in the realm of technology, so I made the switch over to a dual major in Electrical and Computer Engineering. Here, I soon found myself performing research under the guidance of Dr. David Kaeli. This lead to cyber security and computer architecture research positions through MIT’s Lincoln Laboratory and Northeastern’s Computer Architecture Research Lab, respectively. Even as a Freshman I was being exposed to advanced concepts and graduate-level research. Both of these opportunities taught me skills and knowledge un-teachable in a classroom, and helped me to fine-tune my academic and professional interests.

By the beginning of my second year at Northeastern, I was sold on the school’s heterogeneous educational vision, but I had yet to explore its hallmark feature: the co-op program. When it came time to begin applying for my first 6-month internship, I found the prospect of working at a startup to be at the top of my list. The idea of having complete autonomy over my work while directly contributing to the success (or failure) of a business thrilled me. I had been creating Android applications for a few years, and had even entered an admittedly badly conceived app into that year’s Husky Startup Challenge. I was able to leverage this skillset to land a co-op as the Lead Android Engineer at a startup called Tablelist. Tablelist is a young, rapidly expanding company, founded by a Northeastern graduate. They develop software enabling users to plan VIP nights out on the town by reserving bottle service at nightclubs and lounges. Their flagship product at the time was an iOS app, but they had yet to break into the Android or Web markets.

Working as the Android lead, I began my co-op by doing what I was brought in for, to create the company’s native Android client. For about a month, I was focusing purely on mobile development, and could feel myself learning at an incredible pace. This was just the tip of the iceberg. After the initial Android app release, I took some time to assist our lead backend developer (another Northeastern graduate) in his job of creating everything that powers the apps behind the scenes. The stack of Node.js and MongoDB, hosted on Heroku servers, was completely new to me. However, after some guidance and a lot of patience from coworkers, I felt comfortable contributing to the project.

As the co-op continued, my development experience continued to grow, but an unexpected progression occurred. I actually began finding myself more and more interested in the business side of Tablelist. Being at such a small company, lines were blurred with everyone’s roles, and my opinion towards business and marketing decisions was often queried and highly valued. This made me feel more engaged in the company and even transformed certain aspects of how I developed software. I began to see features not only as technological achievements, but also as means to accomplish business-related goals. This perspective shift has made me far more effective as an engineer and made the entire engineering process more satisfying.

As my co-op soon comes to an end, I re-enter the world of higher education with a plethora of newfound knowledge, a full-time job offer with stock options, and a much better idea of my aspirations for the future. Much of this would not have been possible without the support and guidance provided by the University Scholars program and by Northeastern University in general, and for that I am extremely grateful. These last two years have served as a small example of the possibilities that Northeastern can offer its students, but there is still so much unexplored opportunity. The next few years may remain shrouded in mystery, but I am confident that many more incredible experiences lie ahead.