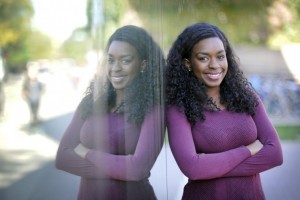 Lola Akingbade, S’18, interviewed more than two dozen African-Americans in St. Louis this summer, looking to capture the city's mood in the wake of the shooting death of Michael Brown. Photo by Matthew Modoono/Northeastern University.

by Jason Kornowitz, this story originally appeared in Northeastern News.

It was June, and Lola Aking­bade was in Fer­guson, Mis­souri, looking to cap­ture the zeit­geist in the wake of civil unrest. Unarmed black teenager Michael Brown had been killed by white police officer Darren Wilson on the streets of this quaint St. Louis suburb just nine months ago, sparking riots and calls for police reform.

“I was angry,” said Aking­bade, a third-​​year stu­dent of rhetoric and behav­ioral neu­ro­science at North­eastern Uni­ver­sity, “but I also wanted to har­ness my edu­ca­tion to make a pos­i­tive impact in the community.”

Aking­bade attended talks and ral­lies, seeking out African-​​Americans with keen per­spec­tives on policing, protesting, and polit­ical rep­re­sen­ta­tion. And then she inter­viewed them in a rented office space in the heart of down­town St. Louis, asking insightful ques­tions of some two dozen con­cerned cit­i­zens, mil­i­tary vet­erans, com­mu­nity activists, youth orga­nizers, faith leaders, and non­profit CEOs.

The inter­views formed the core of the Black Voices Project, which Aking­bade plans to show­case at upcoming con­fer­ences on race and com­mu­ni­ca­tion. A member of the Uni­ver­sity Scholars Pro­gram, she received a Scholars Inde­pen­dent Research Fel­low­ship to tackle the project, which was super­vised by Sarah Jackson, an assis­tant pro­fessor of com­mu­ni­ca­tions studies.

“Lola’s work con­tributes to a larger move in con­tem­po­rary pol­i­tics and cit­izen media to high­light the voices of those who have his­tor­i­cally been voice­less, even as their com­mu­ni­ties become cen­tral to national news sto­ries,” said Jackson, whose research focuses on how social and polit­ical iden­ti­ties are con­structed in the public sphere. “Tra­di­tional media gen­er­ally rely so heavily on the voices of elites that they per­pet­uate the biases of these elites; projects like Lola’s high­light alter­na­tive ways of telling sto­ries about race and cit­i­zen­ship that are cru­cial to truly under­standing how to solve issues of racial inequality.”

‘What does it mean to be black in St. Louis?’

Aking­bade, who was born in Nigeria and grew up in New Jersey, asked the inter­view par­tic­i­pants a range of ques­tions and then designed an info­graphic to dis­play the data.

Topics ran the gamut, cov­ering black iden­tity, police bru­tality, and polit­ical change. When Aking­bade asked par­tic­i­pants to describe what it means to be black in St. Louis, one respon­dent said, “Having to prove one­self.” Another replied, “Being proud and con­sciously aware of who I am in the community.”

The vast majority agreed on solu­tions to solving the community’s policing prob­lems, which were cat­a­logued in the Depart­ment of Justice’s March 2015 report on Brown’s shooting death. “The black com­mu­nity was putting for­ward very spe­cific pre­scrip­tions,” Aking­bade explained. “People of all dif­ferent back­grounds who were only con­nected by their black­ness were offering very con­cise solu­tions to policing and protesting.”

Protesting has given us a voice. It’s allowed young people to get out and get involved in a move­ment that they see is worth­while and can con­nect with.
— Com­mu­nity activist

Many respon­dents favored com­mu­nity policing, empha­sizing the impor­tance of requiring offi­cers to live and work in the same neigh­bor­hood. They wanted offi­cers to build strong ties with com­mu­nity mem­bers and a say in the hiring and firing of them. “When you live in the com­mu­nity and work in that com­mu­nity it becomes a part of who you are,” said Tony Neal, the CEO of the Summit Lead­er­ship Ini­tia­tive, a nationally-​​recognized youth lead­er­ship pro­gram based in St. Louis. “If you don’t live there, it simply becomes a workplace.”

The power of protesting

More than half of the inter­view par­tic­i­pants flocked to Fer­guson fol­lowing Brown’s death, protesting his murder and a grand jury’s deci­sion not to indict Wilson. Aking­bade found that protesting empow­ered them, allowing them to decry racial injus­tice in the black com­mu­nity, forge new rela­tion­ships with each other, and develop a stronger sense of self.

As one respon­dent put it, “Protesting has given us a voice. It’s allowed young people to get out and get involved in a move­ment that they see is worth­while and can con­nect with.”

Some believed that the media’s cov­erage of the protests was one-​​sided, that destruc­tion and looting rose to the fore while the police’s use of teargas and rubber bul­lets was glossed over. “The media,” said Her­dosia Bentum, a Fer­guson activist, “made it look as if the mil­i­ta­riza­tion was jus­ti­fi­able.” Noted a local entre­pre­neur: “Pro­jecting an image of black people as not being civilized—that was the image on the media rather than the idea that this cop bru­tality beat down and made up lies about Mike Brown.”

I want to make it my mis­sion to pos­i­tively impact the lives of people of color.
— Lola Akingbade Fer­guson, the respon­dents said, is “a cat­a­lyst,” “a beau­tiful place,” and “the center of rev­o­lu­tion.” They have high hopes for its polit­ical future, one where more black leaders will be elected and held account­able by the com­mu­ni­ties in which they serve.

But some, like Lakesha Boren, expressed skep­ti­cism. “I know a lot of people feel like voting is the way,” she said, “but I’m the type of person who believes that even if we do get black people in office who think the way that we do, they will still be treated hor­ribly and it will be hard for them to get their job done.”

Aking­bade noted that a few people believed that real change could only be achieved by cre­ating inde­pen­dent black com­mu­ni­ties, by using the prin­ci­ples of entre­pre­neur­ship to build exclu­sive schools, gas sta­tions, and gro­cery stores. “They want to be cut off from main­stream cul­ture and sys­tems of oppres­sion,” she explained. “For some, it’s a sur­vival mech­a­nism, it’s the answer.” King Asuar, a fit­ness instructor, explained the ratio­nale. “Not to say we hate, we dis­like, we detest others,” he said, “but what we are saying is we love us.”

Jackson was impressed by Akingbade’s ability to elicit candid answers from the par­tic­i­pants, noting that people are often hes­i­tant to open up their lives to an out­side researcher. “It’s clear from the responses Lola received,” Jackson said, “that she put her sub­jects at ease and that they shared a sense of the value of the project.”

Aking­bade explained that her work in St. Louis has shaped her career path, that it opened up the pos­si­bility of har­nessing her pas­sion for sci­ence to con­duct research on health dis­par­i­ties in under­served pop­u­la­tions. “I want to make it my mis­sion to pos­i­tively impact the lives of people of color,” she said, adding that her pro­fes­sional goal is to become a physi­cian. “I want to explore how health and race intersect.”