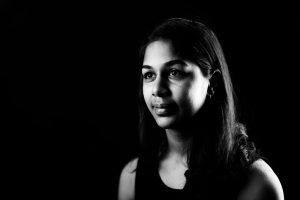 University Scholar and Northeastern journalism major Aneri Pattani has worked in newsrooms across the country, amassing an impressive reporting portfolio. She has covered breaking news for The Boston Globe, written health and technology enterprise pieces at CNBC, and unearthed compelling stories at The Texas Tribune, including coverage on the aftermath of a Supreme Court decision to overturn restrictions on the state’s abortion clinics.

International reporting, meanwhile, has been an intriguing opportunity that had yet to take shape—until now. The senior was recently named the winner of this year’s “Win a Trip with Nick” Contest, an opportunity that will take her on a reporting assignment to West Africa in June with Pulitzer Prize-winning New York Times columnist Nicholas Kristof. They will focus on global poverty issues, about which Pattani will blog and potentially create videos for the Times.

The mystery of reporting abroad, she said, was a key factor that stirred her journalistic juices and motivated her to apply to the contest. “Because it’s intimidating to me, this is the perfect opportunity to learn from someone who does this for a living, and who clearly does it well,” said Pattani, AMD’17.

That Pattani would embrace getting out of her comfort zone and seize the opportunity to bolster her reporting chops is hardly surprising to Carlene Hempel, teaching professor in the School of Journalism. She taught Pattani in “Journalism 1” and “Journalism 2” and has mentored her since then, during which time she said Pattani has aced her professional assignments time after time and completed her journalism courses with the highest distinction. “She’s fearless,” Hempel said. “She will go after any story. She’s unstoppable. Nothing deters her.”

Because it’s intimidating to me, this is the perfect opportunity to learn from someone who does this for a living, and who clearly does it well.

Hempel recalled when the journalism faculty unanimously nominated Pattani for the D. Paul Rich Award, given to a single “outstanding freshman” who shows great promise in journalism. “We were clearly prescient in our choice,” Hempel said.

This summer, it’s the Times all the time

Before Pattani embarks on her reporting trip to West Africa, she will begin a separate reporting post this summer on The New York Times’ health and science desk. She applied for and received a James Reston Reporting Fellowship, a highly selective program that accepts up to four college students annually. Her fellowship work will resume upon returning to the U.S.

“I’m looking forward to seeing Aneri work at the Times, and I know she’ll be able to engage student readers around the country with the places we see and the issues we confront on our trip to Africa,” said Kristof, who described Pattani as “a brilliant student” with “tremendous practical journalism experience.” He emphasized that Northeastern’s experiential education model provides opportunities for real-world experience that makes students so appealing to editors looking to hire young journalists.

He added: “I also thought that Aneri was grounded and was interested in using journalistic platforms not to shout, not to preen before the cameras, but fundamentally to highlight important issues of health and disadvantage that tend to get neglected—and that’s precisely the kind of journalism that I believe in.”

In addition to going to West Africa this summer, Northeastern senior will also work on The New York Times’ health and science desk after being selected for the James Reston Reporting Fellowship. Photo by Adam Glanzman/Northeastern University

A passion to uncover issues of social injustice

In her application letter for the contest, Pattani described a transformative reporting experience while working on co-op at The Texas Tribune last summer. She investigated a tip about a toxic landfill being planned near a colonia along the Texas-Mexico border. She recalled interviewing one resident who explained that most of his neighbors had few resources to fight the proposal and who broke into tears talking about the life he wanted for his children and potentially going on a hunger strike in protest.

In her letter, Pattani wrote that she had always aspired to be a journalist who could give voice to the overlooked and bring meaningful issues to the public’s attention.

The experience, she said, fueled her motivation to uncover issues of social injustice and the human side of public policies—particularly in the area of women’s health. Later, she wrote other stories for The Texas Tribune on topics such as mental health funding and revisions to informed consent booklets that threatened to misguide women thinking about abortion.

She also hopes to uncover these types of stories in West Africa.

“Aneri has a big heart, and she really cares about people and the people she’s writing about,” Hempel said. So it’s small wonder that Pattani, as part of her community service as a University Scholar, also co-launched a newspaper club at the West Roxbury Academy, a Boston public high school, to help students develop interpersonal skills and a sense of confidence through the process of interviewing and writing.

A ‘special student’ who shoots for the moon

John Wihbey, assistant professor of journalism, said Pattani’s drive and determination—as well as her instincts for compelling digital storytelling—were clearly evident in his “Digital Storytelling” course in spring 2016. Wihbey presented the students with all of the homicide data in the city of Boston for the past 50 years, which had some clerical errors and inconsistencies. He asked them to clean and visualize only a small piece of this data. But Aneri decided to clean the entire data set and visualize geographical patterns over time using sophisticated applications.

“It was like asking someone to build a model rocket, and she decided to go to the moon, purely for the intellectual challenge,” Wihbey said. “Her ambition, her hard-working nature, and her brilliance really were highlighted during that project.”

He added: “Aneri is a special student, among the most promising I’ve ever taught.”