Kara Morgan, CSSH '18 reflects on her experience with the University Scholars Dialogue to Istanbul and Berlin.

We found it. After thirty minutes of wandering the streets of Istanbul, fellow University Scholar Aneri Pattani and I found the Journalists Association of Turkey’s ‘Press Museum.’  We embarked from our hotel that scorching afternoon, our last free one in the city, seeking out a museum to meet our mutual interest in freedom of expression and journalism. What we found did little to quell our curiosity--what we found were several small, lonely rooms filled with printing presses. 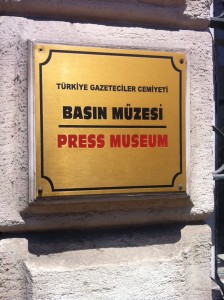 My interest in Turkish freedom of expression was first piqued while on co-op in Cambodia, at the Cambodian Center for Human Rights. I was assigned to the organization’s ‘Freedom of Expression’ project and was tasked one day to research cyber laws and internet freedom in other countries. This happened to coincide with the then Prime Minister, current President, Recep Tayyip Erdogan of Turkey’s several-week Twitter ban across the country in March and April 2014 following the leaking of wiretapped conversations that appeared to implicate Erdogan and other politicians. Then, and now, I was both disturbed by this move and inspired by the continued use of Twitter by determined and creative citizens through Virtual Private Networks (VPNs) and other tactics.

My fascination with Turkish politics and freedom of expression continued this year, as I researched and wrote about corruption cases in Southeastern Europe during my co-op at the Organized Crime and Corruption Reporting Project. The Turkish government, who is rated ‘Not Free’ when it comes to press freedom by international human rights organization Freedom House and was the world’s ‘worst jailer of the press’ in 2012 and 2013, came up time and time again throughout my four months there. 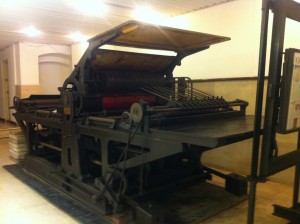 I came into this Dialogue of Civilizations with this lens. Our theme was the politics of ‘space’, and I began our trip convinced that there was no ‘space’ for independent journalism in the country. As I delved into my research project into the freedom of academia, the academics and researchers that I met with reiterated this idea. I heard from multiple professors about self-censorship in the classroom and in research, but of even more extensive censorship for journalists who dared to be vocal with their political analysis and reporting.

When Aneri and I set out to view the only ‘press’ museum we had heard of in the city, we did not know what to expect. One of our classmates joked that we would encounter a museum filled with blank exhibits.

We were a bit disappointed by the ‘Basın Müzesi’, or Press Museum. According to The Guide Istanbul, it contains ‘a wealth of artifacts’ pertaining to the history of the Turkish Press. We agreed to disagree with this description.

For Aneri and myself, this adventure provided an amusing anecdote to share with our classmates, a quick laugh over street-corn and ice cream on our walk back to our hotel. For the journalists of Turkey and the state of freedom of expression in the country, this museum is anything but funny.