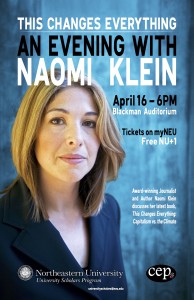 The University Scholars are proud to host Naomi Klein this Thursday, April 16 from 6:00-7:00 PM in Blackman Auditorium. Tickets are available to the public for free by visiting Northeastern's Ticketing Office.

Klein's appearance is part of the Scholars Seminar on Leadership, Research, and Innovation, a semester-long series of events featuring thought leaders and change makers from both inside and outside the university.