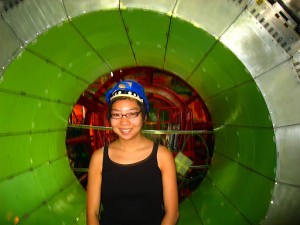 On Thursday, February 6th, Professor Toyoko Orimoto shared her thoughts on the "beauty" of scientific research at our Third University Scholars Seminar on Research and Innovation. Professor Orimoto's research focuses on experimental particle physics, aiming to answer fundamental questions about the nature of our universe: Is it possible that there are extra-dimensions of space-time? What new particles or symmetries exist beyond the standard model of particle physics? What is the origin of mass for elementary particles? Professor Orimoto endeavors to answer such questions as a member of the Compact Muon Solenoid (CMS) Collaboration at the Large Hadron Collider (LHC) at CERN, in Geneva, Switzerland. She is devoted to communicating the importance of and enthusiasm for scientific research to our funding agencies and Congress, as well as to the general public. She is dedicated to reaching out to aspiring young physicists, particularly women and under-represented minorities.

In her lecture, Orimoto argued that "like Art, Science can be useful because it expands the horizons of our minds, of our imagination." During the Renaissance, philosophers often used art and science together to make sense of the universe.  And even today, both artists and scientists aim to engage with and react to their environments in order to better understand them.  Both aim to describe nature in the abstract. Both aim to reveal hidden patterns and relationships in things.  And they both seek out beauty, simplicity and symmetry. Like art, science requires observation, talent and creativity.  The greatest scientists are those who envision their environment in innovative ways.  They can make us look at the world in a new way, just like the best artist do.  There are, of course, also important differences.  Art is subjective and emotional, while science is supposed to be objective and rational.  Most importantly, science has to be experimentally verifiable, whereas art is inimitable. Ultimately however, we can appreciate science just as we appreciate art -- for the very emotion, excitement, and even frustration that it evokes.

Toyoko Orimoto received her Ph.D. from the University of California, Berkeley, where she studied rare B-decays related to the measurement of the CKM angle β with the Babar Experiment and worked on beam instrumentation for the International Linear.  She joined the CMS Collaboration in 2006, as the Robert A. Millikan Fellow of Experimental Physics at the California Institute of Technology. In 2009, she was awarded a CERN fellowship and since 2012, she has been an assistant professor of physics at Northeastern University, where she continued her work on CMS and was recently awarded a DOE Early Career Award. In 2009, she also received the CMS Achievement Award for “decisive leadership in ECAL prompt feedback group”. Her work in physics analysis has been focused on channels with photon final states and has spanned many physics groups—QCD, Exotica, SUSY, and Higgs.

An integrated video of Orimoto's lecture and powerpoint presentation is available to Scholars on our Seminar's blackboard site.