Spatial forms of interpretation have surged across the arts and humanities in recent decades, accelerated by the advent of geolocated data and GIS tools for understanding and analyzing humanistic problems and questions. Yet the genesis of the ‘spatial turn’ is much older and more widespread than the advent of GIS and can be traced back to the analysis of the power relationships underpinning specific spatial configurations articulated by thinkers such as Foucault, Lefebvre, de Certeau, and Virilio in the 70s and 80s. In Literary Studies, starting with the groundbreaking work of Raymond Williams and Edward Said, geographical imaginations have become active modalities for the interpretation of literature and other representational forms. Similarly, Environmental History has emerged as a vital sub-field in which space, place, and ecology are no longer regarded as mere backdrops for human action, but are themselves actors in the unfolding of historical events and conditions. In the creative arts, “site-specific” is a modifier attached to place-attuned projects ranging from the visual arts to electroacoustic music to choreography. Other stories of engagement with space and place can be seen in Philosophy, American Studies, Religious Studies, Cultural Studies and many other constituent parts of the humanities. 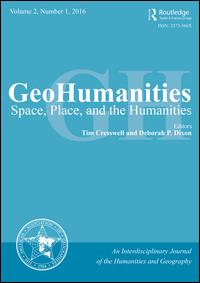 GeoHumanities is the newest journal of the American Association of Geographers, launched in 2015, and presents a new opportunity for publishing interdisciplinary scholarship.

The Institute is based on the recognition of this interdisciplinary and transdisciplinary convergence of geography and the humanities – “geohumanities” –  that links the techniques and epistemologies of GIS to longer standing, critical engagements with space and place. While each of the two parts of the term geohumanities – that is, ‘geo’ and ‘humanities’ – has a long and diverse history, their merging is a recent phenomenon. In 2011 the edited book GeoHumanities: Art, History, Text at the Edge of Place was a key product of a series of events designed to explore the intersection of humanistic forms of geography and other humanities disciplines. In 2015 a new journal, GeoHumanities, was launched by the Association of American Geographers (AAG). In a parallel development, in 2013 the Alliance of Digital Humanities Organizations (ADHO) recognized a GeoHumanities Special Interest Group, intended to address the spatial, spatial-temporal, and place-related aspects of the digital humanities.

These two formalized articulations of geohumanities indicate not only a growing interest in and commitment to cross-disciplinary thought and practice; they also indicate the differing aims and objectives, emphases, and expertise brought to bear in the making of this loosely contained field. The involvement of the AAG, for example, speaks to the continuing evolution of a discipline thoroughly engaged with the broad range of humanist thought, manifest in an emphasis on the ‘geo’ as a human making of worlds. By contrast, the input of the digital humanities indicates a desire within humanities disciplines such as English Literature and History to both illuminate the role of increasingly everyday geo-location technologies in shaping people’s spatial imaginaries and to implement technologies, such as GIS, to visualize imaginaries referenced in cultural texts, from diaries to poetry.

Perhaps a more immediate cause of the emergence of geohumanities is the widespread and relatively sudden uptake of geographically coded data across humanities disciplines thanks to a combination of GIS, GPS, and various forms of locative media attached to the mobile devices that are GPS enabled. It is for this reason that the prefix ‘geo’ has had something of a second renaissance since the turn of the century. In addition to the longstanding uses of “geo” in terms such as ‘geostationary’ and ‘geochemistry’ we now have ‘geo’ entering popular culture, thanks to the new possibilities of being ‘geolocated,’ of data being ‘geocoded,’ and of the ability to partake in ‘geotagging.’ 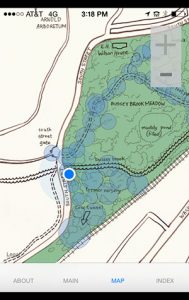 “Other Order” is a sound walk set in the spontaneous landscape of Bussey Brook Meadow at the Arnold Arboretum of Harvard University. Created By: Teri Rueb and Peter Del Tredici

These new technological phenomena relate intimately to the older idea of “geo” as referring to the ‘earth,’ in all of its humanistic implications. Underpinning all of these technologies is a framing of the Earth as Cartesian – that is, composed of four dimensions – such that an absolute location can be discerned. This mode of understanding and engaging with the Earth has its own historical trajectory, being implicated in Classical and Renaissance cartographic efforts, the rendering of the Earth and its inhabitants as machine-like entities in the Enlightenment, and especially the emergence of a military science that relied on a universal cartographic language to render territories knowable, and a precise mathematical knowledge of how projectiles moved through the air. Small wonder, then, that geotagging, which refers to the addition of locational metadata to almost any form of media, has been facilitated by a 20th-century network of military satellites that provide precise locations. These systems were only completely freed from military use in 2000, since which date the prefix ‘geo’ has exploded as a way of denoting that something is precisely locatable.

Geohumanities, then, can be traced through a number of genealogies, including forms of Classical scholarship, the long history of humanism, the specific history of ‘humanistic geography,’ the spatial and material turns across academia, and the more recent embrace of the digital by humanistic disciplines. The Institute will introduce space and place in the humanities to scholars interested in participating in and advancing this interdisciplinary—or even—transdisciplinary, project. How have space and place been defined and conceptualized across a range of disciplines, including philosophy and humanistic forms of geography? How can interdisciplinary topical studies, led by scholars from literature, history, philosophy, architecture, and the creative arts, contribute to a transdisciplinary dialogue on geohumanities? What are the uses and impacts of digital scholarship, methodologies, and representations on geohumanistic inquiry?

Throughout the Institute, we aim to do geohumanities collaboratively in classrooms, galleries, libraries and the field.  We will focus on new interdisciplinary and transdisciplinary research agendas, as well how to bring these agendas to the college classroom. We will provide a habitat in which conversations between participants and visiting scholars about space and place can flourish during the Institute, both formally and convivially. Outputs will include model syllabi and research prospectuses generated by our interdisciplinary encounters. The institute will produce a cohort of teachers and scholars ready to take geohumanities into the classroom and into their research.