India, home to almost 1.4 billion people, holds one-third of the world’s poor. Living on less than $1.90 a day, or the international poverty line established by the World Bank, causes citizens to live in severe conditions, lacking access to basic survival necessities such as water, food, and shelter. During Summer 2, myself and sixteen other Northeastern students were able to travel to India to study Social Entrepreneurship and Sustainable Development. Our studies began in New Delhi focusing on international development strategies and concluded in the South of India in Cochin. In between, we stopped in Dehradun, Rishikesh, Lucknow, Agra, Jaipur and Tilonia, Mumbai, and Kovalam. 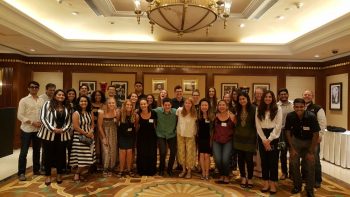 The next step in our journey placed us at Navdanya – an Indian based non-governmental organization focusing on biodiversity conservation, organic farming and the consequences created by the Green Revolution. We were hosted at their farm to learn hands-on about sustainability practices and visit their seed bank. After, we were lucky enough to connect with Indian culture even further during our homestays in Dehradun. Staying with some of the most welcoming families, they encouraged us to hold thought provoking conversations about modern issues in India. Through this experience we felt the raw similarities of our characters, but also realized the additional daily stamina needed to live in a historically disadvantaged country.

One of the most inspiring visits of our trip was to Study Hall Educational Foundation (SHEF). We were based in Lucknow, Uttar Pradesh, for two days studying the extreme inequalities faced by women in India. SHEF is a traditional private school for middle-class students that helps fund the tuition of students at Prerna – a school created by Dr. Urvashi Sahni for the poorest girls in Lucknow. Prerna uses a feminist pedagogy to empower girls by facilitating critical dialogues to educate girls on their rights as women and creating support systems to battle conventional sexism.

During our travels, we were able to visit beautiful landmarks, such as the Taj Mahal, the Gandhi Smriti, and the Ganges River in the Himalayan foothills. Next, we stayed in Mumbai for a week to complete our biggest project, working with social enterprises and nonprofits in the slum of Dharavi. At least 45% of Mumbai’s population lives in slums. Dharavi, recognized as the largest slum in the world, is estimated to be home to 1 million people. After studying the history of Dharavi from Liza Weinstein’s book, The Durable Slum, we learned about the consequences citizens face due to the corruption and fragmentation of the Indian government as the population joins the global modern world. For the past 50 years, plans for redevelopment have fallen through because of political conflict. Over the years, the government has forced people out of their homes without warning or with the promise to relocate them to new housing (which is rarely followed through), leaving residents to live in constant fear or complete homelessness.

Just days before the Kerala floods – the worst to hit the state in the last century – which displaced over 1 million people and killed 400+ people, we were scheduled to end our travels in India and fly on to our next travels, or home to the US. We were notified about potential flooding in the area, causing stress about delayed and canceled flights and distracting us from the prospective disaster and destruction that citizens would be faced with. It was a clear reminder of the incredible privilege we have been born with. Easily exiting the situation, while others homes and lives were wiped away. I am eternally grateful for the experiences and relationships I built, studying, working, and traveling in India, and would highly recommend Northeastern students to participate in this program in the future.