Barefoot College: Built By the Poor, For the Poor

Skills are important attributes that a person develops over time, regardless of their level of education. People living in poverty, or on less than $1 per day, have skills that are never identified or leveraged. However, if brought to use, these skills could empower individuals to become the drivers of change within their communities.

Bunker Roy, a social activist and educator born into a very wealthy Indian family, believed that creating a college for the poor would be the first step to change. So, he founded Barefoot College, an organization located in Tilonia in the state of Rajasthan that provides modern education to low-income students in India. ‘“What the poor thought was important would be reflected in this college,” says Bunker Roy during his TED talk in 2011. He wanted the knowledge and skills of the poor to be showed to the world.

Using this desire as the base of his project, Roy incorporated sustainability and the spirit of service, based on Gandhi’s philosophy, through all of his community’s doings. Local illiterate men and women used their skills in different areas to build and run the college, including constructing the buildings, facilitating aspects of the educational programs and successfully running the entire college on solar power. He built night schools, where children could get an education without sacrificing their jobs, Students came out stronger, more independent, and ready to give back to their communities. 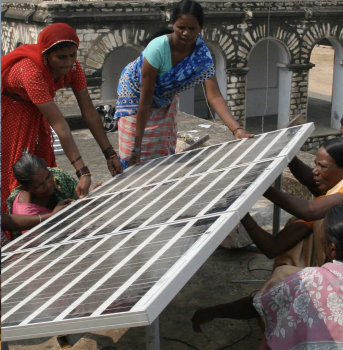 Roy then created the solar mama program at Barefoot College with the understanding that communities can make themselves self-sufficient for their basic needs and older women could be trained to build solar power units. In order to use women as the catalysts of this change, he brought three women from Afghanistan to India, a feat in and of itself, for a six-month long training on how to become successful solar engineers. Similarly, he brought women from Myanmar, Thailand, Fiji, Cambodia, and more. One might wonder how multiple illiterate women could communicate with each other given the difference in their languages. Incredibly, more than 1000 women across 70 countries have been trained to become solar engineers using sign language. After six months, the women are sent back to their respective villages around the globe to self-power their communities and impart the skills they have learned to many more women. The first 70 solar engineers were successful in bringing light to more than 11,000 people.

Tilonia acts as the training base for solar engineers, however, over the last 40 years the solar mama program has expanded by establishing centers in five countries in Africa that serve all of their neighboring countries. Barefoot’s global goals include charting a course for expansion to all of the least developed countries across the globe. Guatemala’s regional center will be opening shortly this year and new centers in Latin America and the Pacific Islands are in development.

The values that Barefoot embodies in all of its work include equality, collective decision making, decentralization, self-reliance, and austerity, making the non-profit college truly one of a kind. These values are sustainable and stand strong as there is an indefinite learning process. The teacher is the learner and the learner is the teacher, meaning within this framework levels of hierarchy are sure not to exist. This decentralized approach to learning is embodied in all of Barefoot’s work, however, the solar mama program is one which has been taken to even greater heights in recent years.