Let’s talk about Mark Zuckerberg — no, not regarding the Cambridge Analytica scandal.

How about highlighting something that hasn’t received as much media attention lately. Something good. Something that Facebook’s founder has been working on for almost a decade.

You may have already heard of Zuckerberg’s $100 million gift to Newark, NJ schools that was announced eight years ago. Newark school district, like many struggling urban school systems, has long been influenced by the city’s high poverty and crime rates. Chronic underfunding of school programs and classrooms is an additional aggravator that reduces the quality of education that students can receive.

The results, according to a 2017 Harvard Study, were significant improvements in English test scores, modest improvements in math test scores, and a few small-scale but important changes in the organization of certain schools. Criticism of the project, however, highlights that about $70 million — almost three-quarters of the gift — was spent to fulfill existing teaching contracts and pay costly management consultants whose job was to organize the entire school system.

The lesson learned was that even $200 million in total (the other half of which came from philanthropists) is simply is not enough to yield impressive results.

Now, a new part of Zuckerberg’s education reform plan will try to tackle rapid teacher turnover near Facebook’s headquarters. Recognizing that expensive housing and long commutes contribute to the issue, he and his wife Priscilla Chan will be partially funding down payments for about 60 teachers and staff across three Silicon Valley schools.

As Tech Crunch explains, the money will go to Landed — “a Y Combinator startup that offers to pay up to half of the 20% home down payment for educators with zero interest or monthly payments. Instead, Landed recoups its investment when the home is sold or refinanced, assuming up to 25% of the appreciation or depreciation of the home’s value.”

For sustainability, any money earned after the selling or refinancing will go back into the Chan Zuckerberg Fund to pay for more educators’ down payments. Landed will earn money by taking a portion of the referral fee that real estate agents earn when educators buy homes, for no additional cost to the educators.

After applying on Landed’s website, educators meet with a local lender to decide whether they qualify for help from the startup. If so, Landed will pay up to 50% of the down payment in exchange for an equity stake in the home.

The return to Landed is helpfully explained by this diagram on the company’s website: 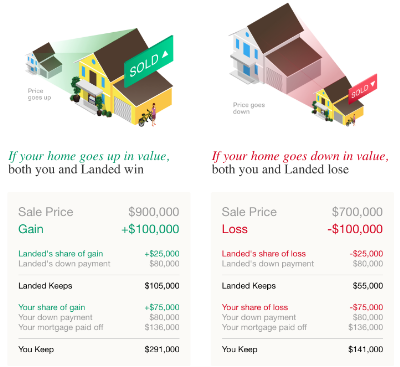 It is likely that the Landed model will work in Silicon Valley, given the near-certainty of nearby neighborhoods increasing in value. Should this model prove to be financially sustainable in the long run, it can be expanded beyond Silicon Valley — but Landed may not be willing to try a similar program in places where housing values could be more variable.

Still, Landed allows these educators to be proximate to their jobs, which should give them more energy to teach. Additionally, giving back to those who support the community’s children and helping them to afford living in the area despite the high cost of living in the Bay Area, may be address some of the concerns that Silicon Valley is experiencing gentrification. As closer and happier teachers lead to higher quality education for students, Zuckerberg deserves a pat on the back — for contributing to education reform, at least.