Students learn about filmmaking and create documentaries on dialogue in England 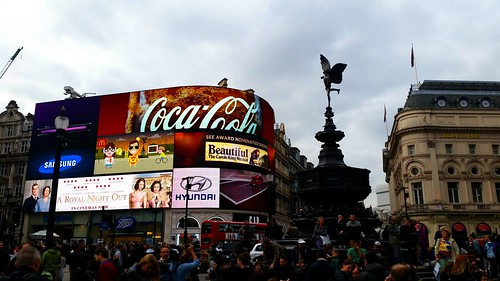 A group of students recently returned to campus after a productive and meaningful educational experience in England, led by CAMD faculty member Michelle Carr, Communication Studies, with the help of Teaching Assistant Zoie Pruner (check out a short video about the trip that Zoie shot and edited here). They were on a Dialogue of Civilization entitled English Culture and Documentary Filmmaking, which aims to familiarize students with the people and culture of England and the British Empire, emphasizing the city of London and its vast history. Through interactions with local citizens and cultures, the students were challenged to produce and edit a short documentary.
“I started the program in 2011 to give students an opportunity to not only make a documentary film but to learn about the culturally rich city of London, where I had worked and studied as a graduate student before coming to teach here at Northeastern,” explained Michelle Carr. “Because London is so full of life and there is so much history and culture in the city alone, I knew it would be a great location for students to make a film and a dialogue of cultures could take place. Northeastern’s mission is for students to obtain a cooperative education, learn skills, grow scholastically, and be internationally educated and I believe this dialogue truly embodies the mission statement of our university and college as a whole. It showcases what our students are capable of achieving when given the opportunity to do so.”

Throughout the Dialogue, students learn all aspects of documentary production – from the pre-production process of intensive research and development of story ideas, scriptwriting, and networking to the technical aspects of filming, lighting, sound recording, digital editing, and graphics. Students also have the opportunity to learn about the theories and methodology behind documentary filmmaking, including directing, production, design, and narrative, and get to work with remote equipment that includes HD cameras, audio, and editing software. While the Dialogue is hands-on and fast-paced, it is truly the trip of a lifetime for anyone with an enthusiasm to explore and research another culture and an excitement to learn filmmaking skills.
“This year, for the first time I took a group photo at the airport before we left and at the end of the program it was amazing to look at that picture from the very first day and then look at the students the very last day and see the growth in their faces in such a short amount of time,” continued Michelle. “I believe seeing other cultures and putting yourself out there, working with other people, being out of your comfort zone, is really what makes you grow as a person and this dialogue is an opportunity for students to do just that. This year I had the opportunity to work with 27 wonderful students who were not only passionate about the films they were making, but excited to learn about English culture, they did a fantastic job, and should truly be proud of themselves!”

The final product, the 10-12 minute documentary, highlights the filmmaking and editing skills the students learned and showcases their ability to effectively tell an engaging story about a topic of their choice. This year, students got quite creative with their topics, which ranged from local music venues to street art to Medieval Minstrels, making the trip even more interesting and memorable.

The group of students that explored the London Street Art Scene, as well as the perception of street art in the art world, wanted to dive into a topic that would be visually interesting, as well as something that is not really considered in day to day life. The documentary challenges viewers to consider new views of street art and graffiti, and during the course of the project, even some group members had drastic shifts in their own perceptions. Throughout the filming process, one of the group’s goals was to find a wide variety of people to interview, and in the end, they were able to speak to an art student, an art history professor who specialized in urban art, the editor-in-chief of Contemporary Lynx art magazine, and a street artist. As most filmmakers hope for, all interviewees had their own unique energy and views that lined up in very interesting ways.
“In our documentary, we take a closer look at the artist experience caught between two worlds. Street artists have fought traditional barriers such as laws, low income, and stigma surrounding their work,” explained student Mary Wilson. “Yet, in recent years street art in London has gained in popularity, profiting the burroughs that once rejected them.”

An interesting component to this Dialogue is that all students on the trip have different backgrounds and comfort levels behind the camera. This diverse range of skillsets makes effective teamwork and sharing of knowledge absolutely key for any group’s success.
“I learned a lot about teamwork throughout the course of the Dialogue,” explained CAMD student Antonio Banrey. “I was one of the most experienced in my group as far as all around filmmaking knowledge. In my own filmmaking experience, a great deal of my work has been individual, or very small team work, so this project took me far out of my normal comfort zone. I learned a lot about keeping up with roles in a project, as well as just managing in a larger team. It pushed me in ways I was not prepared for, and it was exciting.”

CITY OF CAMDEN'S CULTURE AND HISTORY

Another group featured the City of Camden for their documentary, addressing the alternative nature of its culture in contrast to that of central London. The group specifically focused on Camden’s live music and fashion scenes, as well as the development of the Camden Market, to illustrate how artistic expression has shaped the way of life in Camden over the past 70 years or so. Fortunately for this group, the Dialogue’s housing was located in Camden, so they had the chance to easily familiarize themselves with the surrounding neighborhood.

“We truly wanted our documentary to capture the lively spirit just outside our door in the eccentric borough of Camden, and I could not be happier with what we gained from this experience as students, as prospective filmmakers, and as people,” said CAMD student Katie Mahoney.
To capture this spirit, the group’s interviewees included a trained professional tour guide of Camden, local business owners, and gentlemen on Camden High Street holding a “Tattoo & Piercings” sign with an arrow – talk about an interesting collection of interviews!
“The interview process was my favorite part of the experience, because it allowed us as tourists in a new city and as documentary filmmakers to get direct answers to our questions from an eccentric array of people who live and/or work in Camden. The experience truly showed us what it would be like to be a filmmaker one day,” Katie continued. “It was challenging to book interviews, specifically because my group switched topics after we arrived, but once we did schedule them, it was the most rewarding aspect of the trip. The opportunity to start a dialogue with people whom I would never have been able to meet or speak to otherwise was an incredible experience, and our ability to ascertain knowledge and familiarity with our new city through conversations with locals allowed us to stop feeling like tourists and start feeling at home.”
Katie served as the editor and producer of her group, so she definitely got a substantial taste of scheduling, delegating, managing, and overseeing everything that went on throughout the duration of the documentary process. While juggling many moving parts can certainly feel overwhelming at times, Katie explains that it made the final result even more personal and gratifying – and cemented her desires to be involved in this industry post-graduation!

The third group on the Dialogue, which explored Medieval Minstrels, decided to go down this path due to the group’s unanimous appreciation of history and familiarity with an intriguing documentary detailing the same topic by Terry Jones for the BBC.
“We picked Medieval Minstrels because they tend to fly under the radar in historical shows and documentaries, despite being important members of medieval society,” said CAMD student David Murphy. “Personally, I didn’t know anything about Medieval Minstrels going into the documentary, so this topic offered a good learning opportunity for me. Along with knowledge of Medieval Minstrels, I also learned a lot about film-making. Some of the skills I learned include location scouting, sound recording, and lighting. I also learned a lot about working under deadlines, collaborating with a team, and the interview process.”
David and the other students on his team had the unique opportunity to interview medieval music expert William Lyons, who has made his career in composing as well as advising for movies and theatrical works to help them recreate the most honest recreation of medieval music as possible. They also chose to interview an employee at a medieval music shop in London and one of the group’s other students, Jake McConnell, made the three-hour train ride to Shakespeare’s birthplace in Stratford-upon-Avon to interview Shakespearean actors about the role of minstrels in his work.

Since conducting interviews was nothing new to Jake, he embraced the challenge to find the right people to interview and meet them at convenient times and places.
“I joined the Dialogue with quite a bit of interviewing experience already, so for me, the most important skill I learned over the course of the trip was how to work with others to prevent conflict, which is incredibly detrimental when working on a project of this caliber in as little time as we had,” explained Jake.

Finally, the last group explored London’s music venues. Not only was music a mutual interest among all group members, but London is a premier city for music worldwide, and with so many bands and artists both originating and performing in London, they decided they could not focus on just a single one.
“Instead, we discovered that the venues of London are an unsung backbone of the city’s music scene,” explained CAMD student Nathan Caldwell. “Once we realized how influential certain venues were, we knew we had to address the closure of these cultural institutions. I’ve always felt strongly about the power of documentaries for social change, and we hoped to shed light on a problem few people are even aware of.”

This group interviewed everyone from rock starts to venue owners to high profile executives, and as Nathan describes, they were all very enthusiastic and animated because they were discussing their greatest passion. The insight and expertise that the interviews uncovered helped the group shape the direction and vision of their project.

At the end of the day, London – full of creative filmmakers, artists, musicians and actors, but also unique architecture and stunning diversity – is one of the greatest cities in the world to film a documentary. All of these students, as you can see, had the opportunity to explore unique and interesting topics and meet a lot of wonderful people while doing so. The Dialogue pushes students to step out of their comfort zones, build strong relationships, produce an incredible documentary to be proud of, and learn as much as possible. In addition to all the hard work the students did on their films, students also attended class in some of the key sights in London including Westminster Abbey, Tower of London, Churchill War Rooms, and a trip up to Edinburgh, Scotland, to name a few. And, of course, this was along with plenty of other adventures such as experiencing Romeo and Juliet 2017 in the famous Globe Theatre and the Making of Harry Potter.

To learn more about this specific Dialogue, click here.