Thoughts on Food Security and Justice 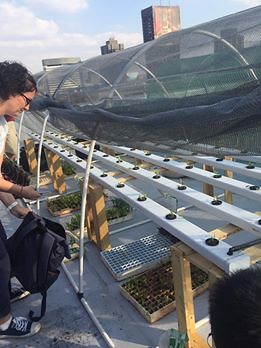 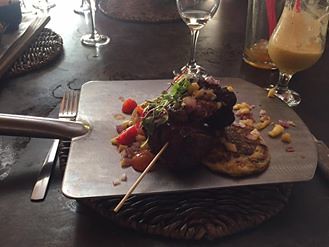 One joy about being abroad is the opportunity to eat and enjoy many cuisines. As a lover of West African food, I looked forward to the many food options Johannesburg had to offer. I was joyed to find international food options and some beloved staples such as pizza and fries. Portions in general were huge and well priced. Though fast food is sold, dinning in is also popular and dinner time can be a lengthy process. Biltong a dried preparation for meat was one of my first true South African foods, tasting similar to beef jerky. Food staples include meats, stews, and carbs. A favorite meal I tried was antelope and mopane worms from Moyo an African fusion restaurant in town.

As I think about food, I can only help but think about sustainability in the context of local development. During the end of the group’s time in Johannesburg before heading to Cape Town, we engaged in coursework on food security in urban environments. I had the opportunity to meet with Michael Rudolph and staff from Siyakhana Gardens, an urban garden in Yeoville Johannesburg that seeks to center urban gardening and food security with academic advancement in said topics. Knowing of urban gardens in the U.S, I wondered about their transformative power in the South African context. For a country that is denoted as food secure, 20% of the nation is defined as food insecure. Food insecurity is tied to disparities in women’s education and securing food availability through affordable means can alleviate poverty and hunger.

The garden also works through a partnership with the local Gauteng government with an urban gardening model specific to rooftop facilities, utilizing relevant technology for advanced farming. Through employment of local community members it fights unemployment and restores dignity, also subsidizing the cost of produce through reducing cost of food travel. In the rooftop model, members of the community work through a social enterprise, learning various planting technologies and taking ownership and agency over the food business. Siyakhana meaning “we build each other” establishing a compelling case for food security grounded in community engagement via employment, empowerment, and thereby skills development. Now that I’m spending my duration of the trip in Cape Town I only look forward to investigating the power of fresh food in doing more than providing healthy options but also shifting dialogue on employment and empowerment in South Africa.